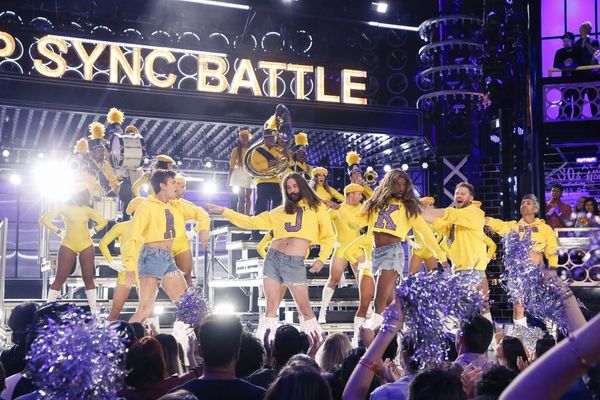 Wearing denim cutoffs and yellow cropped hoodies emblazoned with their initials in purple sequins, the Fab Five looked just like Bey during her unforgettable 2018 set. They nailed the dancing and hair flips, too.

Brown, who also channeled Beyoncé in a separate Lip Sync Battle performance, was the first to take the spotlight, mouthing, “I remember being young, tough, brave / I knew what I needed,” while fanning himself and swiveling his hips. France was next, lip synching, “I was spending all my nights and days laid back daydreaming.”

Porowski then popped up behind some backup dancers to tell the crowd: “Look at me I’m a big girl now / Said I’m gon’ do something.” And Berk and Van Ness ran out from behind the bleachers to bring it home, joining their costars in stomping their fringe-covered white boots to the beat.

Later in the show, the Fab Five split up into two groups to compete against each other. Brown and Van Ness performed Lady Gaga and Beyoncé’s hit collab, “Telephone,” while France, Porowski, and Berk teamed up on Britney Spears’ “Work Bitch.”

You can watch the full episode on demand, on Paramount Network Apps, or on ParamountNetwork.com.

Did you love the fab five’s performances on Lip Sync Battle? Tell us @BritandCo!

Desiree O
Desirée O is a ‘Professional Bohemian’ who loves anything and everything related to the arts, entertainment, and pop culture. She ADORES being a ‘Newsy’ for Brit + Co, covering all of the latest tidbits of awesomeness that you want to read about. When she’s not writing, she’s either making messy art, going on long adventurous walks with her camera, or poking around over at bohemianizm (http://www.bohemianizm.com/). You can find out about Desirée O and her work at http://DesireeO.com/ or follow her on Twitter @DesireeO.
Music
TV
Music TV
More From TV