Missing Summer? Get on This Wakeboard, No Boat Needed 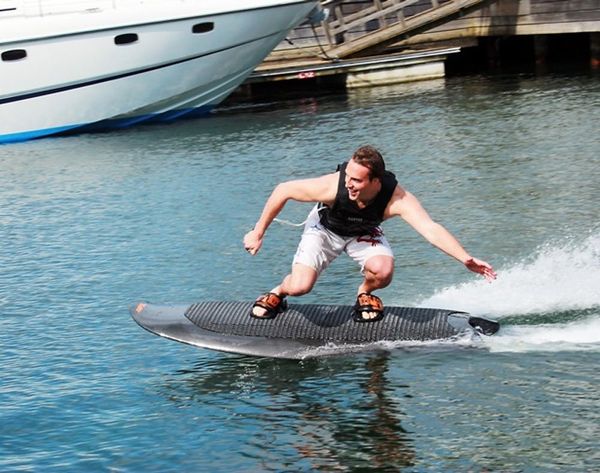 First we had electric scooters, then electric roller skates. Now we have an electric wakeboard! Radinn is a Swedish company that developed a new kind of wakeboard you can ride sans boat. After watching a video of this cool contraption in action, we’re going to send Santa a long letter about this.

We’re still not entirely convinced that there isn’t a ghost driving a ghost boat and pulling these wakeboarders, but we so want to find out for ourselves. The Radinn uses energy-triggering wireless hand control technology, meaning there’s a hand-held remote that lets the driver maintain control of the speed using a jet-propulsion system so that you don’t end up flying into somebody’s dock.

The rider is in complete control of the direction of the board using the same turning techniques that you’d use in traditional wakeboarding. However, since you’re not attached to a boat, you can surf canals, rivers, lakes and oceans without being at the mercy of the boat tether.

The founder, Philip Werner, is a longtime wakeboarder and worked on this project while studying at Lund University. In 2013, he got serious and put together a team of engineers and other partners to develop the prototypes and work on testing. This past spring, they began showing off their finished demo board (unveiling it at the Cannes Yachting Festival) and they are hoping to start taking pre-orders sometime this winter. Start saving your pennies, because it’s estimated to retail for about $20,000.

What else would you like to see made electric? Let us know in the comments!

Annie D'Souza
Annie is the founding father and editor-in-chief of The Midwestival and a long-time jean-on-jean enthusiast.
Tech
More From Tech