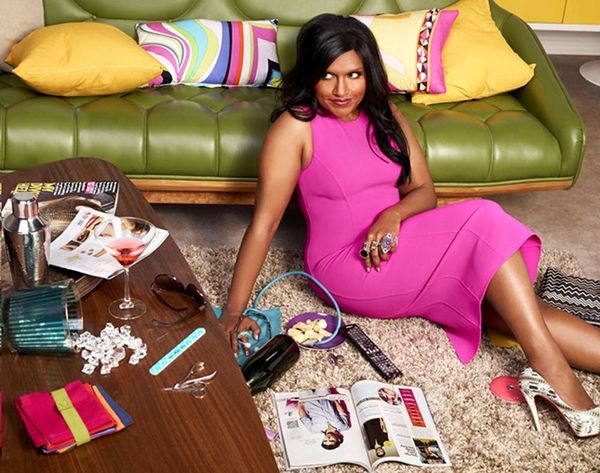 Things we don’t love: that the season finale of one of our favorite shows, The Mindy Kaling Project is tonight. Things we do love: Mindy Kaling. We wanted to count down every single one of the reasons why our girl crush on her borders on maddening, but it would basically just be a scanned copy of her book with notes and large parts highlighted + a supercut of all of the times she made us laugh on sitcoms and television appearances. So yeah, we settled on a top ten list. Here goes:

1. Things I’ve Bought That I Love: If you didn’t know that Mindy Kaling used to have this awesome blog, you were not our friend in the late-’00s when she was updating it regularly. It’s still frozen in time in all of its basic Blogspot glory featuring writeups about everything from Sour Candies (“I don’t NEED my sour candy to be in the shape of vermin, but boy do I like it.”) to Valentine’s Day Lingerie (“I’m very literal minded about holidays. I like wearing Christmas tree earrings at Christmas parties. It’s the old lady-tchotchke side of me. That’s why I love lingerie with hearts on it for Valentine’s Day.”).

2. She is Seriously Idol-Worthy: We didn’t want to start out with this because we wanted to distract you with something fun and light at first like candy before we got deep and meaningful, but it is very true. Mindy was the first woman in the writers’ room at The Office (a job she started when she was just 24, guys) and the first woman of color to executive produce and star in her own show. Soon-to-be first (second?) female president?

3. She Is Kelly Kapoor: Remember how you would watch Looney Tunes and there was one tertiary character or cartoon setting you liked the best and it was only ever on, like, every seventh block in an episode? Kel was like that on The Office. Whenever I talk about how great the show is/was, I am either talking about Jim Halpert or Kelly Kapoor or both, like when Jim has Kelly for Secret Santa and gets her an Edward Cullen poster and she clutches her heart in earnest gratitude upon opening it.

4. Ben Affleck Was Her Alter Ego: Long before she was making out with them on her own sitcom, Mindy was her own leading man in a two-man, er, two-woman off-broadway show she wrote with friend Brenda Withers. Called Matt & Ben, the play was about the pre-fame friendship between Oscar-winning duo Matt Damon and Ben Affleck, following the mysterious happenings after the script for Good Will Hunting fell from the heavens. Yes.

5. Her Closet: Can you imagine spotting your gyno on street style blogs? If Dr. Lahiri was yours, it would be real life. And weird, but cool. Even if the doc is the “real” Mindy’s fictional self, they share some style and at least the bright aesthetic Mindy (and Brit + Co!) love.

6. She Is Correct About Most Things: Like the wise and witty friend that we want to brunch with regularly so she can make us laugh when our love life is wavering on “womp womp,” Mindy is wildly wise in the pages of her book, which you better pick up or borrow your BFF’s copy if you haven’t already. An excerpt below where Mindy describes part of the rom-com formula:

When a beautiful actress is cast in a movie, executives rack their brains to find some kind of flaw in the character she plays that will still allow her to be palatable. She can’t be overweight or not perfect-looking, because who would pay to see that? A female who is not one hundred per cent perfect-looking in every way? You might as well film a dead squid decaying on a beach somewhere for two hours. So they make her a Klutz. The hundred-per-cent-perfect-looking female is perfect in every way except that she constantly bonks her head on things. She trips and falls and spills soup on her affable date (Josh Lucas. Is that his name? I know it’s two first names. Josh George? Brad Mike? Fred Tom? Yes, it’s Fred Tom). The Klutz clangs into stop signs while riding her bike and knocks over giant displays of fine china in department stores. Despite being five feet nine and weighing a hundred and ten pounds, she is basically like a drunk buffalo who has never been a part of human society. But Fred Tom loves her anyway.

7. She Owns This: A Bart Simpson sweater that we want.

8. She Hits on Dudes on Twitter A LOT: It’s not the only reason her Twitter is great, but it’s one of the best. Fellas, how does it feel to be lovingly objectified by a goddess of laughter? We hope good!

9. She Trolled Tinder: Sure, it was a little publicity stunt to get some viewers swiping YES for her show, but whatever. From the pajama pant selfie to the Nicki Minaj body description, she nailed it. And who’s not looking for the Channing Tatum to my “girl from Step Up”?

10. She Sends the Best Christmas Cards: For the holidays a couple years ago, Mindy Kaling sent her famous friends a holiday “Meet-Cute Kit” with a guide to finding holiday romance: marbles, a treasure map, eye lashes, an X-Acto knife and mistletoe that popped out to become an ornament. It was even Jessica Alba’s favorite.

Do you watch and love Mindy? Gush about our mutual girl crush (she’s ours tho) below!