10 ways Vegans + Omnivores Can Live Happily Ever After 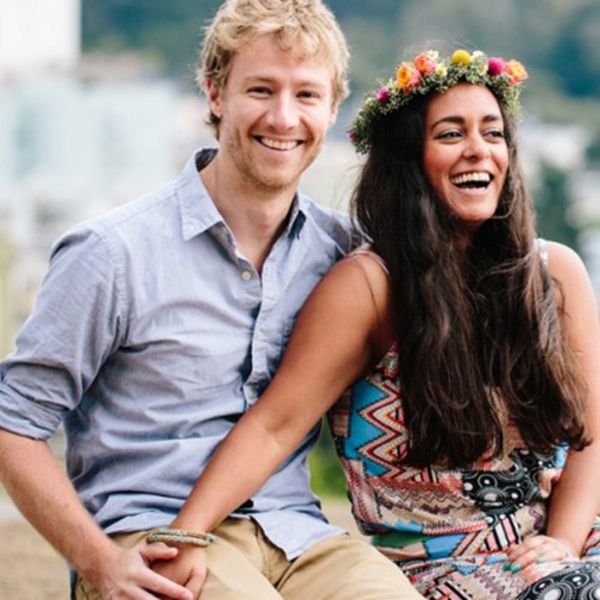 Navigating your newest relationship can bring about questions that you never considered in singlehood, like how your sleeping position with your partner says a lot about the state of your love. Or how scientifically your body language during a disagreement affects the happiness of your partner. But when you’re vegan and you want to expand beyond your circle of vegan friends, your eating habits and lifestyle can raise all sorts of questions/arguments from your new boo, especially when they’re not vegan. We talked to several vegan-omnivore couples about how they made their differences work for them and how to woo that herbivore you’ve been eyeing at your local health food store.

If You’re the Omnivore

1. Find a local vegan or veg-friendly restaurant to take your sweetie for a first date. Says Diana Breen, vegan since age 15, “I remember one guy who took me to a vegan restaurant on our first date; we weren’t a romantic fit, but 15 years later I still remember how thoughtful he was.”

2. Take a vegan cooking class together. You miiight have let it slip to your partner that tofu just can’t be tasty, but go ahead and impress them by testing your tastebuds and expand YOUR palette by taking a vegan cooking class together. Trust me, once you learn how to make a flavorful marinade for that sponge-like protein (+ every green you could possibly think of), you might wanna take back that original statement. We recommend a class at Spork Foods in Los Angeles, or if you’re not in SoCal, DIY a class at home (how romantic!) with help from your pals at Brit + Co.

3. Be open to trying new foods. Jeff and Erin Wysocarski have been together for 11 years and married for six. Erin’s a long-time vegan (10+ years) and runs the vegan blog Olives for Dinner. Jeff is an omnivore who is the photographer for Erin’s blog. He wisely suggests, “If you have a negative experience with a vegan dish or don’t like it, don’t think that ‘all’ vegan food is bad — it was just that one dish.” (Photo via Olives for Dinner)

4. Mix up the meals. Whether you’re cooking at home or going out to eat, you don’t always have to go vegan. Jeff shares, “Do not expect or plan vegan-only meals for every meal. Do it in increasing frequency instead. We initially went to restaurants that offered both vegan and meat-based dishes. Then we tried vegan-only restaurants and enjoyed trying new dishes together there.”

5. Knowledge Is Power: shop for the basics + bookmark vegan cooking blogs. Don’t let the substitutions scare you, especially since it’s become increasingly easier to find vegan ingredients at most chain grocery stores. Add the basics to your shopping list over the course of a few trips and you’ll build up your pantry in no time. Then, the Internet’s the limit: start snooping different vegan food and lifestyle blogs and fave away!

If You’re the Vegan

6. Be honest and respectful. If cooking meat at home makes you unhappy, say something before living together. “I used to live with a partner who cooked fish at home, even though the smell literally (yes, literally) made me sick to the stomach,” says Diana. How to Be Vegan author Elizabeth Castoria recommends, “Knowing where your limits are is important so that you don’t put yourself, or the person you’re dating, in an uncomfortable situation.”

7. Understand their point of view. If you’re hoping that they’ll instantly turn vegan after eating your vegan two “cheese” lasagna, take the time to learn how they feel before pouncing on their beliefs. “Being able to learn from one another, as well as help one another, is a great quality in a relationship that helps us grow as individuals as well as as a couple,” says Carolyn Scott-Hamilton, the TV host behind The Healthy Voyager. Diana suggests “asking respectful questions to better understand each other’s perspectives.”

3. Figure out what dishes you could cook together that you’d both enjoy. Elizabeth suggests that instead of “trying to recreate a huge porterhouse steak by making it with lentils,” opt for meals you both like. “Pastas, soups, and tacos are all usually super easy, tasty options,” says Elizabeth. Some of Erin and Jeff’s favorite meals to prepare together are jackfruit soft tacos, tempeh Ruebens and miso-scented portobellos with a garlic cauliflower mash. (Photo via Brit + Co)

4. Think positive. “Instead of lamenting why he or she isn’t vegan, focus on small changes, like the fact that they tried and liked a vegan dish or asked for a vegan dish for dinner,” says Erin.

5. Don’t issue ultimatums. You might feel frustrated with your sweetheart, but telling them that they must go vegan to be with you can be challenging and unfair for the other person. “Keep in mind that becoming vegan is a process. Although some people do, most don’t do it overnight,” says Erin. Jeff agrees, “Ultimatums and absolutes are not fair — having respect, flexibility and a bit of humor along the way is key.”

Are you a vegan dating a non-vegan or vice versa? Share your tips for making your relationship work with us in the comments!

Jennifer Chen
Jennifer Chen is a freelance writer and editor living in Los Angeles. She's written for O, The Oprah Magazine, Good Housekeeping, Real Simple, and several other publications. When she's not cooking delicious vegan meals, she's hanging out with her TV writer husband and twin girls.
Recipes
The Conversation
More From Recipes