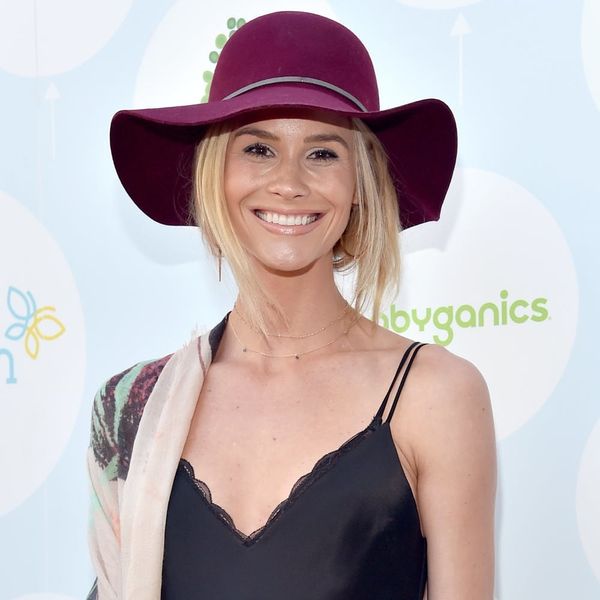 It turns out that Real Housewives of Orange County star Meghan King Edmonds’ baby news is twice as exciting as we thought it was: The thrilled mom-to-be just revealed that she’s expecting twin baby boys!

The reality star took to Instagram to make the big announcement, sharing an adorable pic of herself with her husband, Jim Edmonds, their one-year-old daughter, Aspen, and their teacup Goldendoodle, Girly Girl.

In the photo, the 33-year-old proudly shows off her growing baby bump, posing in profile with her hand on her belly. But the main focus of the picture is what’s written on the two chalkboards in the image. “Our family is growing by FOUR FEET and TWO HEARTBEATS,” one board reads. Jim and Aspen hold the second board, which features a beautiful, hand-lettered message reading: “EDMONDS TWIN BOYS June 2018.”

This is definitely welcome news for fans who got used to regular pregnancy updates from the star while she was expecting her first. She and her husband shared everything from the in vitro fertilization process to Aspen’s big arrival, both on RHOC and via social media. But this time around, their efforts to conceive were kept a secret, even from fellow cast members.

“It was so hard for us to keep it a secret from everyone, especially since we shared our entire IVF journey with Aspen on RHOC from the very beginning,” Edmonds wrote on her blog when she first announced that a second (and, now we know, third!) baby was on the way.

An extra big congratulations to the growing family!

Do you know any families with twins? Let us know @BritandCo!

Desiree O
Desirée O is a ‘Professional Bohemian’ who loves anything and everything related to the arts, entertainment, and pop culture. She ADORES being a ‘Newsy’ for Brit + Co, covering all of the latest tidbits of awesomeness that you want to read about. When she’s not writing, she’s either making messy art, going on long adventurous walks with her camera, or poking around over at bohemianizm (http://www.bohemianizm.com/). You can find out about Desirée O and her work at http://DesireeO.com/ or follow her on Twitter @DesireeO.
Baby
Celebrity News
Baby Celebrity Baby