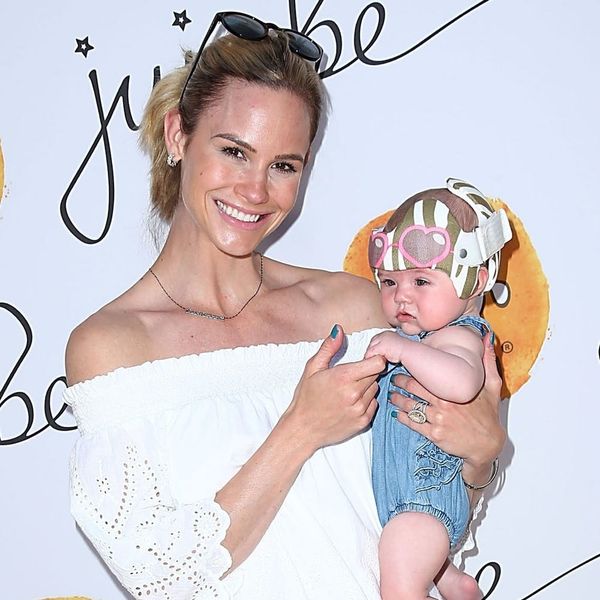 It was almost exactly one year ago that Real Housewives of Orange Country star Meghan King Edmonds announced that she had welcomed a baby girl into the world. And now she’s expecting again!

The 33-year-old took to her blog on Monday to let fans in on the exciting news that she’s pregnant with her second child. This time around, she’s having a little boy, who will make his big arrival in June 2018.

Edmonds and her husband, Jim Edmonds, married back in 2014 and are already the parents of daughter Aspen. The couple shared their journey to conceive their first child via in vitro fertilization on the show, which apparently made it challenging to keep things private this time around. “It was so hard for us to keep it a secret from everyone, especially since we shared our entire IVF journey with Aspen on RHOC from the very beginning,” she wrote.

She added that she told her castmates the big news back in October, when the reunion was filmed. “Tonight on the RHOC reunion, you’ll see that I’m only one month pregnant, but that was filmed five weeks ago: We are now 10 weeks pregnant (and I’m feeling every bit of it)!”

She also addressed the fact that her son was conceived via IVF, which was a “difficult decision” for the couple, even though they had already gone through the process. The fact that they had already endured IVF and its side-effects is exactly why Jim had hesitations. He apparently didn’t want his wife “to have to again endure the emotional rollercoaster that comes with IVF.”

However, Meghan says that she felt comfortable with the choice since she “knew what to expect.” She explained, “Opposite of my first experience with IVF, this time I was anxious for the emotional toll while knowing I could handle the physical repercussions. Additionally I had reliable companionship this time around with Jimmy by my side, my trusty furry companion Girly Girl, and of course baby Aspen.”

Aspen has BIG NEWS! Find out on my blog! (Link in bio!) #exclusive #ontheblog

She continued, “It may seem silly to mention Aspen and Girly Girl, but this support system was everything to me during round 2 of IVF. (Side note: If you remember from RHOC, during my first round of IVF I entered the worst depression of my life, probably due to the erratic hormones combined with loneliness. I was able to wean off my depression meds halfway through my pregnancy with Aspen, which directly corresponded with when I got Girly Girl, and I haven’t been on a lick of antidepressants since then. Dogs are truly woman’s best friend and medicine for the soul… and apparently clinical depression!)”

She went on to say, “I felt like I handled this IVF much more in stride. I’m not sure if it’s because I knew what to expect or if maybe my body was used to the hormones, but it was easier. I was also armed with the emotional mindset to be so much healthier this time around whereas last time I was surrounded by the stress of filming RHOC (which is VERY stressful and emotionally taxing). I ate super healthy, cut out most alcohol (next to impossible to do while filming), attended regular acupuncture sessions, and took daily walks. I also prayed, meditated, and read a lot. I didn’t even watch emotional or negative TV shows. I just felt at ease.”

Their son will join big sister Aspen and Jim’s four children from previous relationships. “When Aspen was only a few months old, Jimmy and I knew we wanted to add another baby to the mix. Yes, Aspen has half-siblings, but we wanted her to be able to share in the joy of waking up to a sibling every day of her life. Plus, her half-siblings are completely enamored by Aspen and they LOVED the idea of expanding our family even more.”