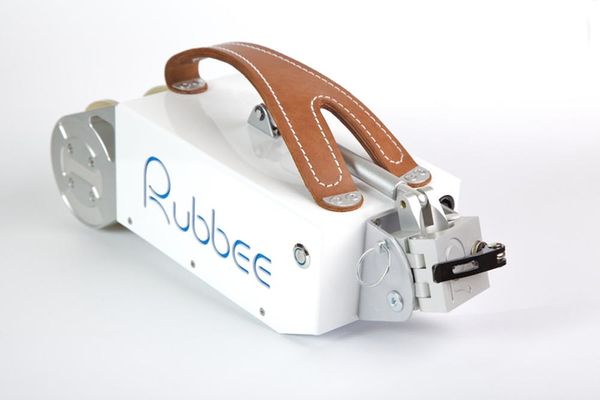 As much as we love our bikes, sometimes we’re just not in the mood to pedal our way around town. Usually that means we take public transit or grab an Uber, but neither of those is the most time- or cost-effective solution. We’d love to snag an electric bike, which would give us all the fun of biking minus the exertion of pedaling, but it seems a little silly to go shopping for a new, different bike when we love our own. Our good friend Kickstarter strikes again. A new campaign, Rubbee, is a drive that can turn any bike into an electric one!

The Rubbee system can be attached to virtually any bike. All you have to do is put it on, turn it on, and go! The mechanism uses friction to power the bike wheel, which makes it about 96% efficient in transferring motion. If you decide during your ride that you’re in the mood to pedal, just insert the fixation pin and you’re back to riding a regular bike. It’s that easy!

If you’re feeling the need, the need for speed, don’t worry: Rubbee tops at at 25 km/hour, which is about a brisk 15.5 mph. That’s probably about as fast as you would normally bike, so don’t worry about this guy slowing you down too much. But this way, you just get to sit and relax while Rubbee does the work. Sounds good to us!

The drive is simple to put on and take off and fairly easy to carry. It’s 13.2 pounds, so you can switch it from bike to bike yourself or even bring it into the office during the day to keep it safe if you park your bicycle outside.

What gadgets do you use to make your bike rides easier? Would you (or do you) ride an electric bicycle? Talk to us in the comments below or over on Facebook.