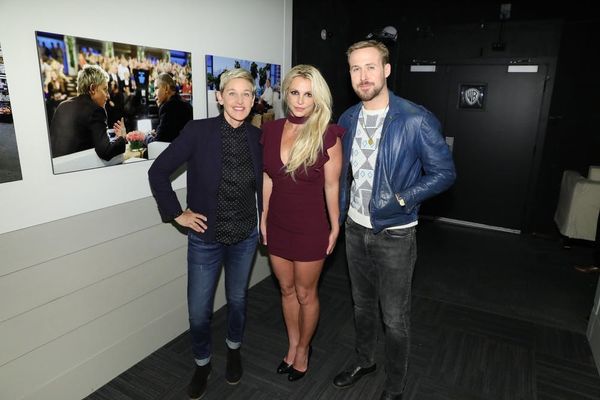 Ryan Gosling appeared on The Ellen DeGeneres Show on Friday, October 12, but he did more than just chat — and slow dance — with DeGeneres while he was there. The actor also had a mini-reunion with his former Mickey Mouse Club costar Britney Spears backstage.

Sitting down with DeGeneres, Gosling mentioned running into Spears backstage. “How long had it been since you had seen her?” DeGeneres asked, as photos of the stars from their Disney days appeared on the screen behind her.

“Well, neither one of us could remember, which I think is a sign that it’s been quite a while,” he replied. (Both joined on The Mickey Mouse Club in 1993, along with fellow future stars Christina Aguilera and Justin Timberlake. Keri Russell and JC Chasez were also Mouseketeers at the time, although they joined in 1991.)

“I remember when we first got to the show, they had all the kids perform for one another,” Gosling recalled of his initial introduction to his Mickey Mouse Club castmates. “And I remember it was Christina Aguilera and then Britney performed, and I remember thinking, ‘Okay, so they are freakishly talented.’ I was used to working with talented people, but that was another level.”

When it came to his own intro to the group, he used his nationality to try to impress the other kids. “I think I was just like, ‘I’m Canadian,’ and they were like, ‘Good,'” he joked.

Spears appeared earlier on DeGeneres’ show to tease an announcement she’ll be making on October 18. (You read that right — she was announcing an announcement.) Whatever the news is, we’ll find out via DeGeneres’ YouTube channel next week.

What are your favorite memories from the Mickey Mouse Club? Let us know @BritandCo!

Desiree O
Desirée O is a ‘Professional Bohemian’ who loves anything and everything related to the arts, entertainment, and pop culture. She ADORES being a ‘Newsy’ for Brit + Co, covering all of the latest tidbits of awesomeness that you want to read about. When she’s not writing, she’s either making messy art, going on long adventurous walks with her camera, or poking around over at bohemianizm (http://www.bohemianizm.com/). You can find out about Desirée O and her work at http://DesireeO.com/ or follow her on Twitter @DesireeO.
Nostalgia
TV
Nostalgia TV