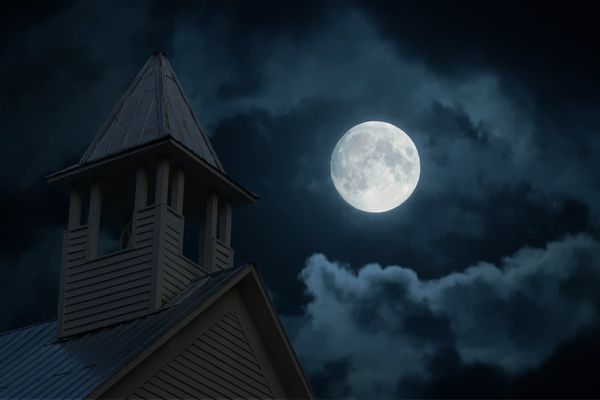 Hallmark begins its annual Countdown to Christmas programming before Halloween, and while we're excited to get cozy on the couch with some hot chocolate and and feel-good flicks, we're not ready to entirely skip over one of the most fun holidays of the year. Halloween doesn't just mean lots of snack-sized chocolate bars — it also means (this year) Zoom costume parties, horror movie marathons, and, if you're anything like us, some seriously scary podcasts to keep you holding your breath while you're driving, exercising or just cozy at home. Here are nine podcasts that are perfect for the Halloween season.

1. Spooked: Now in its fifth season, WNYC and Snap Judgment's super-scary podcast tells true supernatural stories by the people who lived through them. If you're a fan of ghost stories, you'll love letting yourself be creeped out by this one — and you might find yourself repeating them to friends, too.

2. Nightlight: Nightlight features Black authors telling Black stories of the haunting variety, everything from romance to sci-fi to classic horror, it's seriously not to be missed!

3. Unwell: This Midwestern gothic mystery tells the story of Lillian Harper, who returns home to care for her ailing mom. But in doing so, she uncovers mysteries and horrors from her childhood that are sure to freak you out.

4. Ghost in the Burbs: Friends and neighbors of Wellesley, Mass. share stories/urban legends to schoolteacher Liz Sower that will run a few chills down your spine while but giving you a bit of a chuckle.

7. The NoSleep Podcast: Based on the popular r/NoSleep subreddit, which is best described as on online version of sharing scary stories around a campfire, the fictional podcast of the same name takes some of the most popular — AKA the most terrifying — tales and narrates them, audiobook style.

8. Alice Isn't Dead: This fiction drama from one of the co-creators of the popular Welcome to Night Vale podcast follows truck driver Keisha as she winds through strange and lonely small American towns looking for her wife Alice, a former driver herself who mysteriously went missing and is presumed dead. As you can imagine, Keisha encounters several spooky and supernatural evils on her trip, hooking you in and keeping you terrified at the same time.

9. Lore: This popular horror podcasts tells the dark and creepy side of true historical happenings, giving you a whole new perspective on the world while supplying you with endless anecdotes to share with everyone you know.

10. Inside the Exorcist: What better way to get in the Halloween spirit than with a deep-dive on one of the scariest movies ever made? Inside the Exorcist traces the origins of the 1973 film to its too-scary-to-be-real inspirations, as well as the inner workings of how the film came to be — a bonus for Hollywood nerds everywhere.

11. Limetown: This investigative podcast attempts to unravel the mystery of what happened when hundreds of women, children, and men disappeared from small-town Tennessee and were never heard from again. It's fictional, but that doesn't make it any less compelling. A 10-part TV series, starring Jessica Biel, begins when Lia makes her first big breakthrough.

12. Anything Ghost: Anything Ghost has been around for over a decade. In each episode, host Lex Wahl shares real-life ghost encounters from people who write in and takes listener calls for a first-person perspective.

13. Archive81: This fictional found-footage horror podcast centers on Dan, an archivist with the Housing Historical Committee of New York State, who goes missing while reviewing mysterious, ominous recordings made with the tenants of an unnerving apartment complex years prior. The detailed layers (and spooky findings) to this well-made project are best served by your undivided attention.

Do you have a favorite scary podcast? Let us know @BritandCo!