8 Spooky Netflix Originals to Get You Ready for Halloween 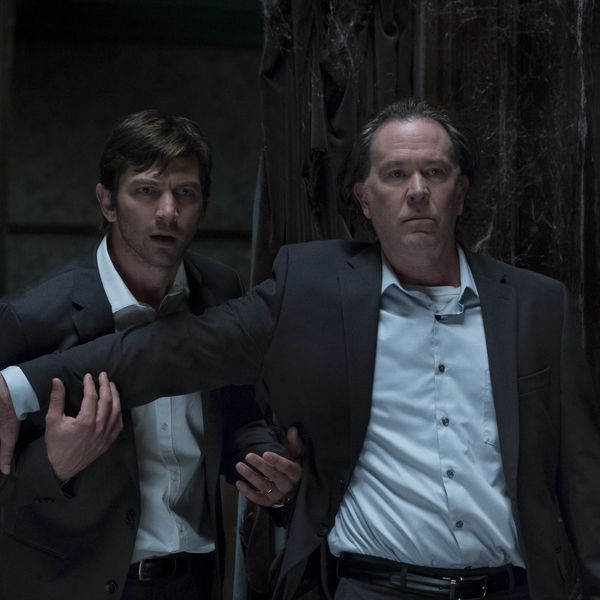 Netflix has received a lot of love for its romantic comedies lately, but the streaming giant has been creating original content for five years now and has amassed a massive — if not intimidating — library of gems in every genre. With Halloween right around the corner, we've rounded up some of the best and spookiest recent horror titles to give you just the right amount of scare. (Photos via Netflix)

The Haunting of Hill House: Adapted from the classic 1959 horror novel by author Shirley Jackson, which was based on true stories of haunted estates in history, The Haunting of Hill House follows a group of siblings who grew up in a mansion where their nightmares turned real as they return to face the demons they hoped to leave behind as children. This one just might be Netflix's scariest original series yet. (Photo via Steve Dietl/Netflix)

The Ritual: Based on the 2011 novel of the same name, The Ritual follows four young men who, just a few months after the death of the fifth member of their group, take to the Swedish woods for a boys' hiking weekend. Soon they find themselves off the trail and surrounded by lurking noises that turn out to be a legitimately terrifying monster, forcing them to confront their own darkness. Is it perfect? Maybe not. But is it terrifying? Absolutely. (Photo via Vlad Cioplea/Netflix)

The Babysitter: Bella Thorne and Judah Lewis star in this campy horror-comedy about a kid who stays up past his bedtime to spy on his babysitter — only to discover the satanic cult proceedings that she brings to the house when he's asleep. It's a fun take on a gory genre, with major Scream vibes. (Photo via Tony Rivetti Jr./SMPSP/Netflix)

Extinction: A family man must face his recurring nightmares in real life when alien forces begin taking out the earth's population and he has to fight for his family and find out what he's really made of. (Photo via Aleksandar Letic/Netflix)

Dark: Although this twisted German series is more thriller than horror, there are supernatural elements that make it just creepy enough to keep you on your toes (and afraid to keep watching). Not unlike another spooky Netflix fave, Stranger Things, Dark is about a child going missing and sending multiple families on the hunt for him, uncovering the connections in a mystery that spans three different generations. (Photo via Stefan Erhard/Netflix)

The Open House: If you're looking for high-quality horror, you might want to skip this one, but if you're just looking for a current scary flick with some familiar faces (Dylan Minette of 13 Reasons Why fame stars), The Open House should do the trick. Following the death of their family's patriarch, a mother and her teen son move to a relative's secluded mountain home while waiting to be sold. The property's open houses invite not just prospective buyers, but a series of strange and unexplained (and totally spooky) occurrences. (Photo via Netflix)

Chilling Adventures of Sabrina: Chances are the Netflix adaptation of the iconic teenage witch character will be more campy-scary than actually scary, but that doesn't mean we're not 100 percent here for its dark take on all things high school, witchcraft, and the occult. (Photo via Diyah Pera/Netflix)

Gerald's Game: Based on the Stephen King novel of the same name, this psychological thriller follows a couple looking to reignite the spark in their marriage with a romantic trip to their remote lake house. Soon, Gerald is dead, and his wife Jessie is left handcuffed alone, faced with panic-induced voices in her head and visitors that may or may not be real. It's excruciatingly intense at times, and a perfect Halloween watch (just, not alone, okay?). (Photo via Netflix)

What do you have in your Netflix queue for Halloween? Let us know @BritandCo!