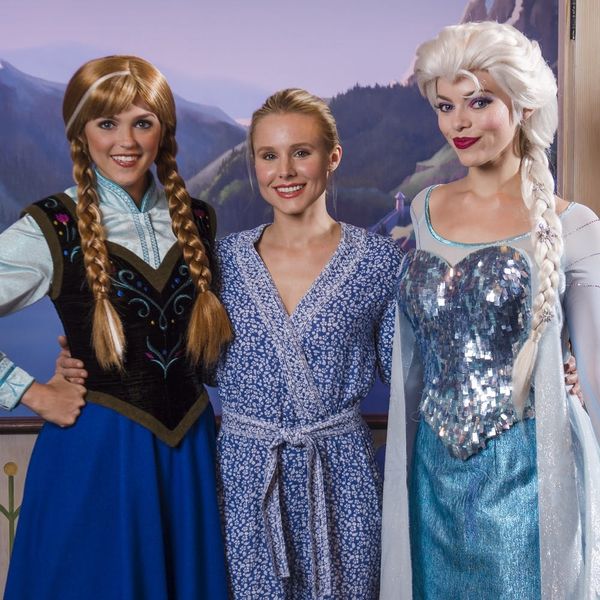 Kristen Bell is just full of surprises this week! After reviving fans’ hopes for a Veronica Mars reboot and showing off a brand new “friendship haircut” with her A Bad Moms Christmas co-star, Mila Kunis, the mother of two did the unthinkable and suited up as a yet another character from past… sort of.

While appearing in a guest spot alongside her old Veronica Mars co-star, Ryan Hansen, in his YouTube detective comedy series, Ryan Hansen Solves Crimes on Television, the actress who once played the voice of Anna in Disney’s Frozen dressed up as her character’s sister, Elsa — but not in the way you might think.

In fact, *this* Elsa has a mean streak that sees her doing far more than building castles of ice. “You don’t even have a billboard on sunset, and they give those to cats now,” she sneers at a man in a frog costume before shoving him over a wooden table.

A Princess Tiana-clad Samira Wiley, who plays Detective Mathers on the show, points a gun at Bell’s bad girl alter ego Elsa, but she only smiles, saying, “You’re not gonna shoot Kristen Bell,” before hopping out a window. Wiley begrudgingly admits she’s right, saying, “She was in CHiPs,” before chasing the actress out of a window.

From the looks of the next clip, she doesn’t get away, though, with the The Good Place star being put into the back of a squad car. When a little girl appears, crying out in protest (“Wait! So you’re not actually Elsa?”) Bell, 37, bends down to tell her a secret. “You know what sweetie?” she quips with a less-than-Disney-friendly line. “Elsa can suck my d*ck.” Oh, my!

Sign up to try YouTube Red free for three months (subscribers will be charged $10 per month once the trial period ends) to watch episode seven, on which Bell appears, in full — so worth it!

Do you think Kristen Bell makes for a better Anna or Elsa? Share over @BritandCo.

Nicole Briese
Nicole is the weekend editor for Brit + Co who loves bringing you all the latest buzz. When she's not busy typing away into the wee hours, you can usually find her canoodling with her fur babies, rooting around in a bookstore, or rocking out at a concert of some sort (Guns N' Roses forever!). Check out all her latest musings and past work at nicolebjean.com.
Celebrities
Celebrity News
Celebrities Disney Movies