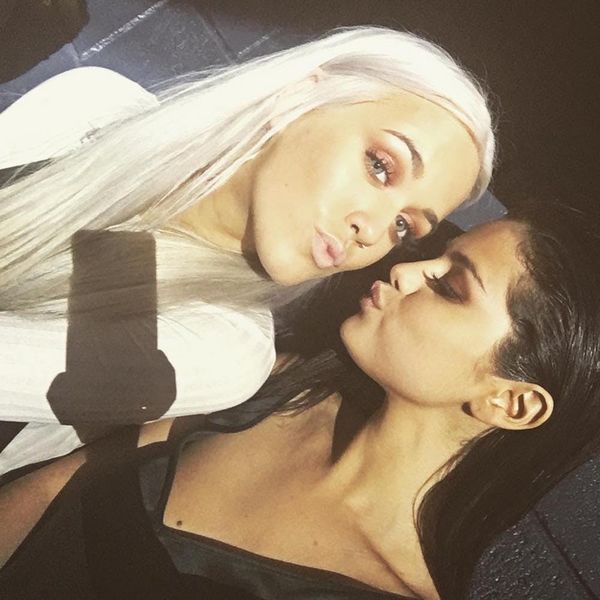 The degree of separation between young A-listers is pretty much zilch, and this news definitely proves it. Sure, Selena Gomez may or may not have had a thing with Niall Horan, and we ALL know that “I Knew You Were Trouble” by Taylor Swift, Selena’s BFF, is about Harry Styles, but their relationship goes deeper than that. In case you haven’t heard, Selena Gomez, who is also launching her own Netflix series, is embarking on her Revival tour from May 6 to July 9, and she’s hired a very talented and totally unexpected rising MUA to hit the road with her.

News broke recently that Selena’s new on-tour MUA is none other than Louis Tomlinson’s younger sister Lottie Tomlinson. If you’ve been following the teen on Instagram, you know that the girl has pretty impressive style + beauty chops. The 17-year-old also is a bonafide YouTube beauty guru with over 135,000 subscribers.

According to Hello Magazine, the pair met backstage at The X Factor in the UK, where Lottie was assisting her hair and makeup mentor Lou Teasdale. Lottie gave Selena a touch up, and the “Hands to Myself” singer liked it. Since then, Lottie has done Selena’s makeup for other red carpet events. Therefore, it’s no surprise that Selena reached out to her friend. It’s not Lottie’s first time at the rodeo — she assisted during her big brother Louis’ tour previously with One Direction — and the teen MUA admitted to Hello, “I know a lot of what to expect. But it’s different because I’ll be on my own at first; I won’t have my brother or Lou or anyone with me.”

Good luck, Lottie. We have a feeling you’ll do just fine.

Are you a fan of Lottie Tomlinson’s work? Tweet us @BritandCo!

Kimberly Wang
Kimberly Wang writes about all things pop culture, tech, style, and beauty. She's a Bay Area transplant and has an MFA in Creative Writing from Columbia University. On a sunny New York day, you can find her hanging out with her mini schnauzer Isabelle Jellybean on a blanket in Central Park.
Celebrity Makeup
Beauty News
Celebrity Makeup
More From Beauty News