Thanks to 4D Printing, This Furniture Can Build Itself 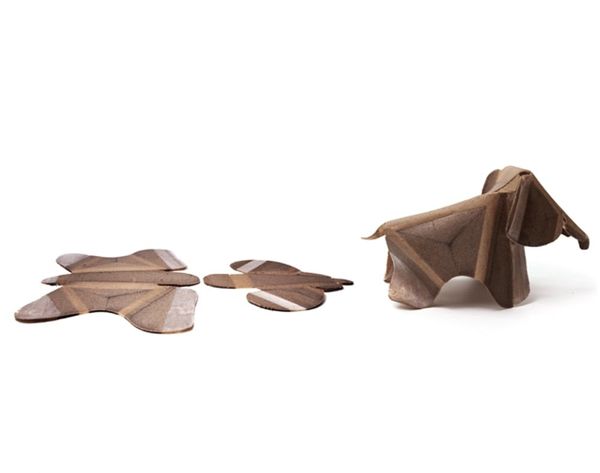 Not all robots are shiny and full of gears and LEDs. Case in point — the inventions coming out of MIT’s Self-Assembly Lab. They’re designing various materials — planks of wood, pieces of carbon fiber, etc — that morph into functioning objects with just a splash of water. Kind of like those little pills that turn into animal-shaped sponges when you leave them in water… but way more scientific.

Seeing the pieces in action is kind of like magic, but we’re not going to give any credit away to the supernatural. This is all science, ladies and gentlemen. With the integration of sensors, logic and outputs, computational architect Skylar Tibbits and his team at MIT are putting the if-this-then-that logic to work in one of the most useful ways possible. For example, they’ve created a series of small wood planks that, when exposed to moisture, fold into toy elephants!

Okay, maybe that’s not so much useful as it is adorable, but imagine if that small plank of wood were a big plank of wood that morphed into a table instead of a toy elephant. You could permanently trash those illustrated IKEA instructions and that weird wrench. All you’d need is water.

Tibbits calls this process 4-D printing because you’re turning one material into a new form, with the trigger being the fourth dimension — time. When you splash some water, you get a table. The team has also made carbon fiber that reacts to temperature for a car spoiler that aerodynamically morphs with the friction the car is producing.

This insane innovation is totally making us rethink the scope of robotics. Tibbits says, “We can listen to materials and use them as a programmable material. We can program biology.” While that sounds like a line from the beginning of a sci-fi movie where furniture takes over the world, we’re hoping these innovations just continue to make the world a more intuitive place.

Are you as amazed by this 4-D technology as we are? Tell us what you’d do with it in the comments!

Katelan Cunningham
Katelan is a tech junkie obsessing over all things startup and design. She has entirely way too many apps on her phone and is no stranger to binge-watching. She accidentally fell in love in Los Angeles and that’s where she currently lives, writes, tweets and grams.
Furniture
Tech
Furniture science
More From Tech