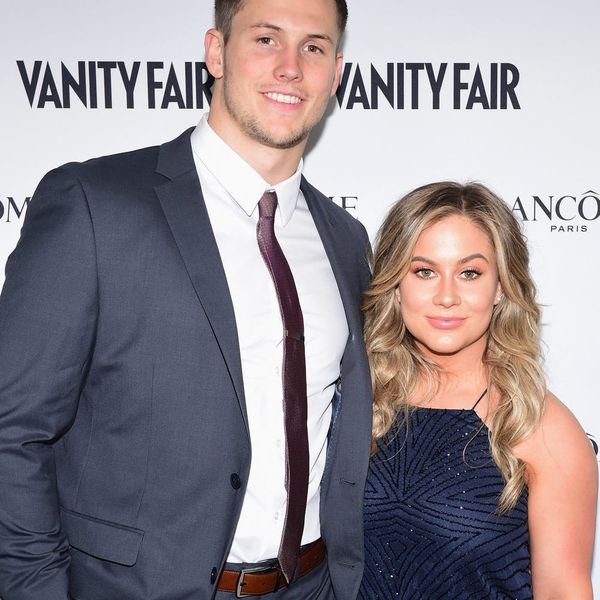 Shawn Johnson and husband Andrew East have had a roller coaster of a week. After finding out that they were expecting their first child together just days ago, the couple has taken to social media to share the heartbreaking news that they’ve suffered a miscarriage.

In a 20-minute long video posted to YouTube, the pair bravely shared their story, saying, “It’s not the happiest video, but we feel like a lot of people go through this so we wanted to share it.”

As the Olympian elaborated on her Instagram page, “This is by far the hardest video we’ve ever posted, but we felt as though it was a story that needed to be shared as so many struggle with the same thing.”

“pregnancy + heartbreak”. New video is up on our YouTube page. Link in bio above. This is by far the hardest video we’ve ever posted but we felt as though it was a story that needed to be shared as so many struggle with the same thing. @andrewdeast I love you more than anything in this world and I know you are going to make the greatest Daddy in the world someday. Thank you for being my rock through all of this.

Their clip begins with a flashback to the moment a tear-filled Johnson found out she was pregnant just four days prior, before sharing to the news with her husband of one year by gifting him with a pair of teeny tiny baby Converse — his favorite shoes.

From there, we see the concerned athlete, 25, phoning in her symptoms of pain to the doctor, as her doting husband, 26, strokes her hair and reassures her that “We don’t know what this is.”

“I started having really bad stomach pains and a lot of bleeding which is not good for a pregnancy,” she laments in a shot of their ride to the doctor’s office.

While both the would-be mother and father admitted the pregnancy was unplanned and that they weren’t quite ready, the news that they wouldn’t be having a little one after all was understandably heartbreaking. “You go from shock, … (“to elation! East chimes in) to ‘holy crap,’ to ‘I can’t do this,’ to, ‘Let’s do this!’ and now it’s like, I pray to God I CAN do this,’ the star explains.

Unfortunately, it wasn’t the pair’s time, with the doctor explaining that Johnson’s body had miscarried naturally after six to eight weeks, most likely because “chromosomally, it wasn’t normal.”

The duo, who got engaged back in 2015 at Chicago Cubs’ Wrigley Field, is leaning on one another in the wake of their tragedy. “@andreweast I love you more than anything in the world and I know you are going to make the greatest daddy in the world someday,” the gold medalist wrote on her page. “Thank you for being my rock through all of this.”

East is seemingly just as supportive, telling his bride throughout their YouTube video what a champ she really is. “I can’t emphasize how proud I am of you. How strong you are,” he tells her.

Following an overwhelming response to their video, which currently has more than 95,000 views, the twosome also took to Facebook live for a Q and A, answering tough questions such as whether or not they would try again (“Absolutely”) and if they would be scared going into a second pregnancy (“Absolutely”). “My mom had a really hard time getting pregnant, so I didn’t think it would be easy for me to,” Johnson revealed.

Still, they’re staying positive, saying that they’d be open to adoption if pregnancy wasn’t in the cards. “We know everything happens for a reason,” the balance beam champ told fans. “We believe God’s got a bigger plan for us. All we can do is be positive, otherwise we just sink into a hole.”

Do you relate to Shawn and and Andrew’s heartbreak? Tell us over @BritandCo.

Nicole Briese
Nicole is the weekend editor for Brit + Co who loves bringing you all the latest buzz. When she's not busy typing away into the wee hours, you can usually find her canoodling with her fur babies, rooting around in a bookstore, or rocking out at a concert of some sort (Guns N' Roses forever!). Check out all her latest musings and past work at nicolebjean.com.
Celebrities
Celebrity News
Celebrities Celebrity Baby Womens Health
More From Celebrity News