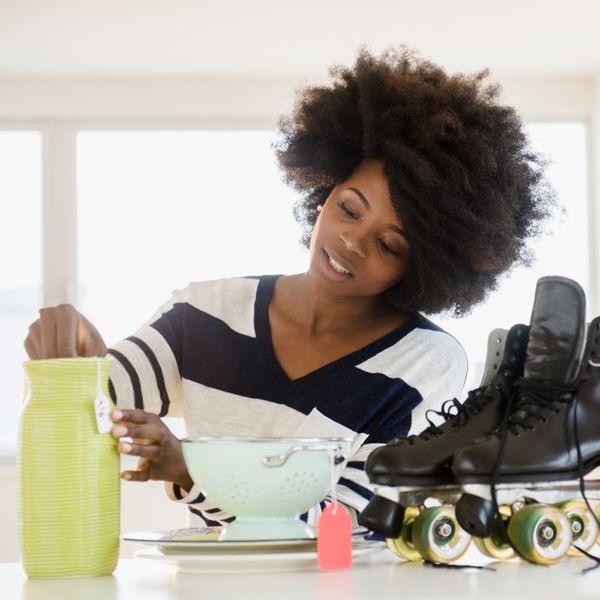 You’re feeling the urge to get organized, to clear the clutter, to open up some room in your physical space so that you can welcome in the new — both literally and metaphorically. After all, you’ll definitely have an excuse to go shopping once you’ve responsibly cleared out some older items. But what happens when you realize that sentimental pieces make up some of that so-called clutter? You’ve been thinking for years about whether or not you should hang on to those mementos. It’s tricky!

The final push you’ve been looking for to actually let go of some of that stuff? We’re about to give it to you, and it’s even coming from an expert. “You have permission to let go of old mementos!” encourages MakeSpace organizational partner Lisa Zaslow. “You won’t be audited, and there’s no test. You’ll free up space and will feel lighter when you free yourself of things that have been weighing you down.” Keep scrolling for eight signs that you’re ready to bid a fond farewell to an item you’ve been holding on to.

1. It’s not one of the first things you would grab from your home in an emergency situation. No one likes to think about the worst-case scenario, but, as you learned every time you had to stop, drop, and roll during a school fire drill, it’s important to have a plan just in case. Close your eyes and imagine what handful of stuff you would try to grab as you dash out the door if your home were on fire. If the item in question doesn’t make the cut, you might not actually treasure it as much as you think.

2. You’re not that crazy about the way it looks. Obviously, there’s more to mementos than meets the eye, but aesthetics can be important too, particularly when we’re talking about items that are meant to enhance your home’s decor. Maybe your grandparents gave you that old-school chandelier or your cousin sent you a piece of her art — so nice of them! — but if it doesn’t inspire you to look at it, there’s nothing wrong with considering your options. Is there someone else in the family who might better appreciate the item? Is there a charity related to the gifter’s interests that might appreciate having it donated as part of a fundraising auction?

3. It doesn’t actually bring back that many positive memories. We would never encourage you to part with a piece of family history that’s associated with special memories from your childhood, but we would encourage you to think critically about how many memories said item really brings back. “Put on your thinking cap, and take a clear, objective look at why you are keeping your keepsakes,” Zaslow suggests.

4. It’s not unique to your family or personal history. The odds are pretty good that no one in your family expects you to keep a lamp that your great aunt bought from Target for the rest of your life. If the lamp serves your purposes, that’s great, but you should let go of the expectation that every single item you inherit is meant to become everlasting family memorabilia. An off-the-shelf piece that’s not unique to your history is likely not going to stick around forever.

5. You’re holding on to it for someone else. We commend your generosity, but it’s not your job to hold on to family keepsakes for an indefinite period until your sister has space or your parents are ready to redecorate. If you’re trying to free up space in your own home, you’re allowed to let all relevant parties know that they have a limited window in which to pick up the stuff you’ve been storing. If the items mean enough to them, they’ll find a way to make it work… And if they don’t? It’s time to say a guilt-free goodbye.

6. You’re keeping it out of a sense of guilt. “If an item stirs up negative or difficult emotions, such as sadness, regret, or guilt, it can be even harder to think logically about it,” Zaslow admits. “Making matters even worse, the longer we keep something, the more value we tend to attach to it. Being aware of these tendencies can help you make better decisions about your seemingly sentimental items.” Do what you can to ensure that you’re tackling these decisions when you’re in the best and clearest mindset. If, even then, something you’re saving makes you feel bad, you probably know what needs to be done with it.

7. You’ve never felt particularly inspired to display it. Is that so-called keepsake gathering dust in a storage space or hidden by stacks of other stuff in your “horizontal filing system” (AKA, piling things on every available flat surface)? It doesn’t sound like you’re treating it like a keepsake, does it? If this sounds familiar, you might consider taking photos of the items, then donating, gifting, or otherwise responsibly disposing of them. “Keep the memories and let the objects go,” Zaslow wisely advises.

8. You don’t worry very much about protecting it. It’s not a great sign if that “special” item is in hiding; it’s an even more telling one if you’ve never felt particularly concerned about keeping it safe from water damage, mildew, fire, or theft. “Thinking about putting mementos in the garage?” Zaslow asks. “Think twice. Maybe they aren’t that meaningful to you.”

What was the most sentimental thing you’ve ever decided to part with? Tweet us how you let it go @BritandCo.

Alli Hoff Kosik
Alli Hoff Kosik is a freelance writer who is passionate about reading, running, rainbow sprinkles, her lipstick collection, watching embarrassing reality TV, and drinking pink wine. She lives in Brooklyn with her husband and (in her dreams, at least) three golden retriever puppies. Listen to her talk books on The SSR Podcast.
Adulting
Organization and Cleaning
Adulting Organization