7 Signs Your Partner Is Gaslighting You 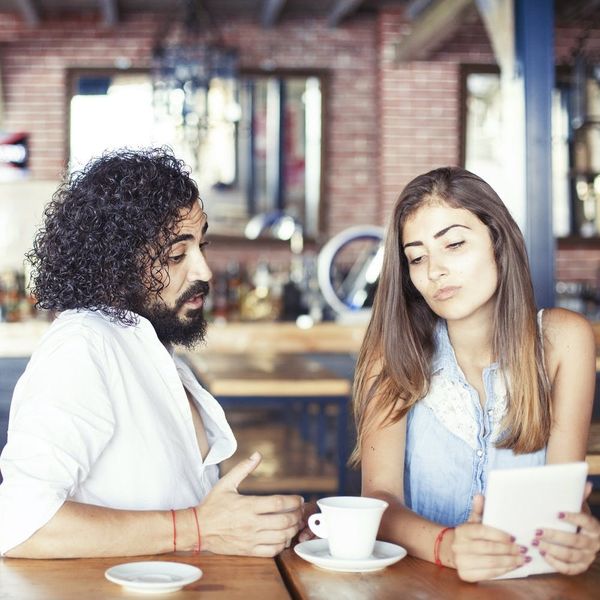 We love euphemisms, especially when it comes to dating and relationships. Breadcrumbing, ghosting, benching, phubbing — without any knowledge of the millennial dating dictionary, you’d have no idea what any of this behavior means. Gaslighting is another one of these nicknames, but it describes a more malicious kind of maltreatment with a much longer history. The term was coined in reference to the 1944 film Gaslight in which a man convinces his wife she’s insane, and it’s a legitimate form of emotional and psychological abuse.

Dallas-based psychiatrist Dr. David Henderson defines gaslighting as “a form of manipulation used by an abuser to get an individual to question their own reality, thus making them susceptible to the abuser’s power.” The very nature of gaslighting makes it difficult to detect, but Henderson has outlined seven major signs of the abuse for us.

1. They invalidate the victim’s feelings. By labeling emotions as either “right” or “wrong,” gaslighters punish their partners for feeling certain ways. “A gaslighter… does not address the underlying trigger of the emotion, but rather attacks the emotion itself, placing moral value upon it,” Henderson remarks. This tactic alleviates them from guilt and reassigns it to the victim.

2. They change the facts. According to Henderson, a common phrase from gaslighters is, “That may have been what you heard, but that’s not what I said.” Because the abuser is constantly shifting their stances on issues or altering the “facts,” the victim is unable to ever properly interpret their actions and words, which can be disorienting when trying to identify the truth.

3. They avoid confrontation. To elude confrontation, gaslighters commonly turn to sarcasm. “The person using it is always in control,” Henderson says. The truth behind the sarcastic comments is impossible to identify, and this leaves victims vulnerable because they are then forced to reveal their interpretations and feelings about the remarks. This information can later be used against the victim.

4. They pit others against the victim. As masterminds of manipulation, gaslighters are unsurprisingly able to maneuver how their relationship appears to outsiders. Making certain to share only their side of the story, the perpetrator is always the “good guy” and the victim the “bad guy,” explains Henderson. Without discerning friends and family, the victim may find that their loved ones believe the abuser’s narrative.

5. They project emotions on the victim. In a process called projection, gaslighters take their own emotions and act as though the emotions are those of the victim. This often occurs in regards to infidelity. “If they are unfaithful, they blame [the victim] for being too paranoid and distrusting and inattentive, thus making [the victim] feel unfaithful,” Henderson explains.

6. They give backhanded praise. Praise, as with all manipulation tactics, ultimately serves the perpetrator’s interests. According to Henderson, it can be just as much of a weapon as criticism. The praise is typically in reference to something the victim did that directly benefitted the abuser, or the praise is entirely insincere and driven by an ulterior motive.

7. They isolate the victim. To maintain their position as the ultimate authority in their partner’s life, the abuser will incite doubts about those who don’t agree with them. “In this sense, they isolate [the victim] from other sources of reason and put down those who try to intervene,” Henderson says. And without that support, it becomes almost impossible to evade the grips of a gaslighter.

Had you ever heard of gaslighting? Tweet us @BritandCo!