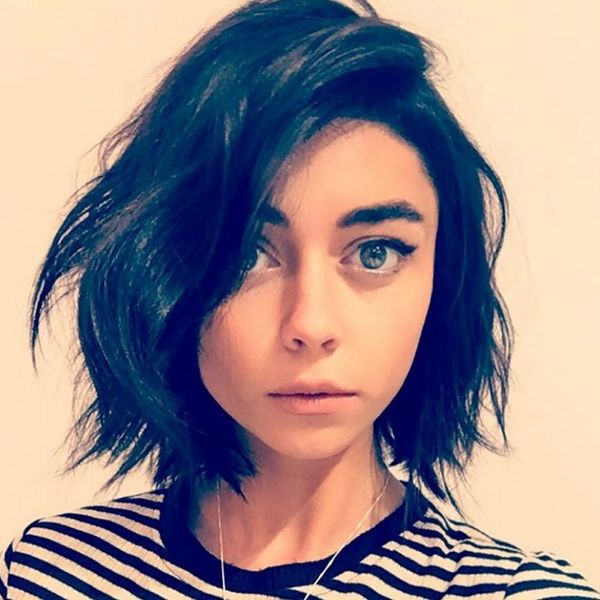 PSA: Spring’s official arrival is a mere five days away. We’re definitely starting to refresh our wardrobe with some fun floral prints, but to celebrate to change of seasons, a new hairstyle may also be in order – at least, it has been for a handful of celebs. And while you may expect the spring hair makeovers of Hollywood to reflect a lightened version of their winter locks, that doesn’t appear to be the case.

Last week, Modern Family’sSarah Hyland surprised us by posting a photo on Instagram that showed that her trademark, ashy brunette color had been replaced by a shade her stylist calls, “textured truffle.” While traditionally, the dark color would have been rocked during winter and the highlighted one during spring, it appears as though Sarah paid no mind to the fashion faux pas.

Following along a similar path, Shailene Woodley recently debuted the exact same hair transformation while at the premiere of Allegiant. Instead of her balayage color, Shailene went for a deep, espresso-inspired hue.

And then there’s Bella Thorne. (Three makes a trend, right?) A few weeks back, the teen star who’s famous for her long, red locks decided to switch things up by instead opting for a light shade of brown she’s dubbed, “brownie hair.” While Bella’s change-up isn’t quite as dramatic as Sarah and Shailene’s, it’s still going against the norm.

Now, don’t get us wrong — we love a lightened up hairstyle as much as the next beauty buff — but we have to admit, this is a pleasant surprise. Lighter colors are notorious for requiring more upkeep, and maybe celebs have finally had enough. Could this be the lazy girl-approved hair trend that’s about to take over Hollywood this spring? We’re going to go ahead and say yes.

Did you just get a spring hair makeover? Tag us in your transformation on Instagram @BritandCo.

Cortney Clift
Cortney is the senior writer and special projects editor at Brit + Co. She typically covers topics related to women's issues, politics, and lifestyle. When she's not buried behind her computer you'll find her exploring New York City or planning her next big adventure.
Celebrity Hair
Hair
Celebrity Hair