‘This Is Us’ Star Sterling K. Brown Made Golden Globes History 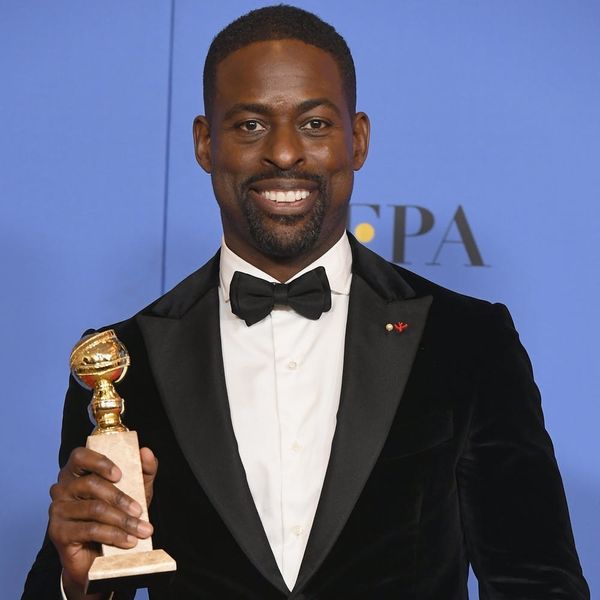 Four months after his exciting Emmys win, Sterling K. Brown has won again for his role as Randall Pearson on NBC’s This Is Us — this time at the 75th Golden Globes. His latest award is especially exciting, because it makes him the first Black man in Golden Globes history ever to win the “Best Performance by an Actor in a Television Series — Drama” category.

“Don’t want to run out of time, so let me thank my wife. Ryan Michelle Bathe, I love you so much,” he started his history-making acceptance speech. “Thank you for supporting me through the whole thing.”

Brown also pointed out why he thinks he won, and thanked his show’s creator, Dan Fogelman, for making all the difference with his character, Randall — proving yet again that representation matters.

“Throughout the majority of my career, I have benefited from colorblind casting, which means, you know what, hey, let’s throw a brother in this role. Right? It’s always really cool,” he said.

“But, Dan Fogelman, you wrote a role for a Black man. Like, that could only be played by a Black man. And so, what I appreciate so much about this thing is that I am being seen for who I am and being appreciated for who I am. And it makes it that much more difficult to dismiss me or dismiss anybody who looks like me.”

He later told the press backstage, “I’ve never been the first brother to do anything. … I’ve never considered myself to be a trailblazer. I just try to stand in my truth all the time.”

If you missed Brown’s history-making win, you’ll be able to catch him this week when This Is Us returns to NBC.

Kat Armstrong
Kat has been a writer, social media maven and mom for longer than she's willing to admit. She's also spent time in front of and behind the camera, interviewing celebs, politicians and acting as a producer for fashion and artistic photography shoots. When she isn't writing for various orgs and publications, she's hanging with her kids, husband and French Bulldog, Peter, in Toronto, Canada.
Golden Globes
Celebrity News
Golden Globes