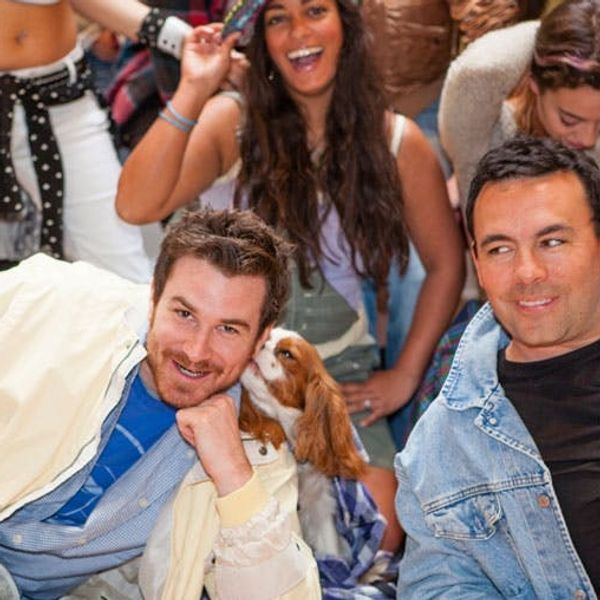 Happy day after April Fools’ Day! We are recovering from a Tuesday filled with Bugles, flannel and crop tops around these parts. In case you missed it, for this year’s prank we turned our site back in time to the most glorious decade of all: the ’90s. From custom content to a complete site redesign, we left no stone unturned on the ’90s transformation front. Huge props to our entire team for pulling this whole thing off in well under 24 hours :) #welovethe90s

Here are all the magical things that went into creating our ’90s April Fools’ awesomeness:

1. A Glittery New Logo: First up, we created a brand new (or really old) logo. It blinked, sparkled and made our hearts flutter.

2. Comic Sans is the New Black: Comic Sans. So horrible but so beautiful at the same.

3. Fresh Editorial Images: The design team whipped up a new batch of fancy editorial images to keep the homepage feed fresh as ever.

5. DIY Denim Shortalls: On the DIY front, we legitimately made a whole slew of DIY content just for this prank.

6. 5 Ways to Style a Scrunchy: The most hilarious thing about this post? The fact that scrunchies might actually be back in style.

7. Game Boy Color, Hot of the Presses: Forget iPhone rumors, the ’90s were all about Game Boy.

9. Totally Fly Platforms: Did you ever own platform sneakers in the ’90s? If not, you totally can now.

10. Color-Changing Goodies: Did the technology of color-changing objects ever stop amazing you?

12. Crystal Pepsi: Do you remember this? According to one reader, this is apparently still available…

13. Gnarly Grunge Styles: Grunge is officially in… as if it ever left ;)

14. Talkboy Tech News: I totally wanted a Talkboy back in the day! And remember the pink edition?

15. Lisa Frank Gear We Need, Like, Yesterday: Neon dalmatians for the win.

16. Duct Tape Slap (Snap?) Bracelets: We found slap bracelets at a local souvenir shop and did what we do best: slapped duct tape right on ’em.

17. Get Organized with Trapper Keepers: If Dropbox wants to keep being a digital Trapper Keeper, they’re gonna need to bring in some neon.

18. Crystal Light Cocktails: Not only were these cocktails concocted with Crystal Light, but they were all named after Saved by the Bell characters! #beldingwouldnotapprove

19. Instagram: On the social side of things, we went all out with acting as if it was the ’90s. Lunchtime snacks included. We used the hashtag #welovethe90s across all social channels.

21. Facebook: Pretty sure I had the original version of that LOSER sweater.

22. The Team Got Totally on Board: Finally, the team brought it home by dressing in ’90s attire for April Fools’!

23. Gwen Stefani Showed Up: How killer are those lace-up Converse boots?

24. We Built a Pyramid: Um. This happened. And that is why working here RULES.

25. Turkey Rocking Docs: Finally, Turkey Temple got in on the action by sporting my totally worn-out purple Doc Martens.

Anjelika Temple
As Co-Founder and Chief Creative Officer of Brit + Co, Anjelika Temple brings her voracious consumption of all things creative and colorful to DIY projects, geeky gadgetry finds and more. When she's not DIY-ing her heart out, you'll find her throwing dinner parties with friends or adventuring with her husband David, their daughters Anokhi and Indira, and their silly dog Turkey.
Party