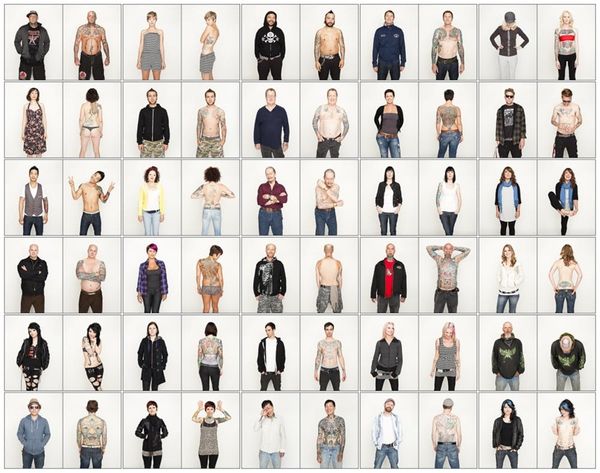 Question for the day: Would you get naked in front of someone within 10 minutes of meeting them? That’s what hundreds of tatted up humans did in Vancouver for a photo concept called The Tattoo Project. (So see, it’s okay if you said yes.)

Anyone looking to up their game should talk to local photographer Spencer Kovats. Over the course of three days, he and 11 other top high-art photographers shot portraits assembly-line style for a book called The Tattoo Project: Body, Art, Image.

Artful epidermises were documented with side by side portraits, each photographer shooting with their own interpretations.

After seeing these images, we’ll never look at anyone the same way again. For all we know our doctors, dentists and bus drivers are hiding some serious needlework under those scrubs, jackets and uniforms.

The project took place in 2010, when thousands of photos were taken. Two years later, the book was published, packing over 200 bodies that double as art galleries. Besides the intrigue of totally tatted up skin, it’s also pretty interesting to see the photographers’ different takes on the subject matter — how they use lighting, how their subjects react to them and what tones and hues they incorporate. It really is one part cultural study and one part photography study.

If you’re digging Kovats’ work, he also has some pretty swanky and stylized stache-laden shots for a Movember project. The style is contrasting to the stark Terry Richardson-esque look used for the images seen here.

The Tattoo Project: Body, Art, Image can be gracing your coffee table for a mere $33 and is available on Amazon.

Got any artful tattoos of your own? Bare it all in the comments below.

Lex Monson
Alexis is the co-founder of Punkpost, the app that lets you send handwritten cards (yes, handwritten by a real human) in the amount of time it takes you to send a text message. The exclusive card collections are created by a community of artists and designers and hand letter pressed on high-quality cotton paper. Get the full experience by downloading the app from the iTunes Store.
Art
Home
Art Photography study Tattoos