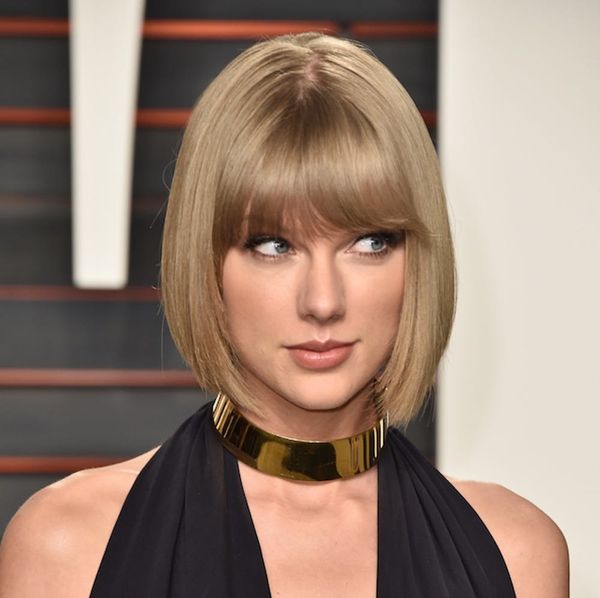 1. “One year. That was easy.” Taylor Swift and Calvin Harris have survived one year of dating, and while we’re sure there are countless Swifties both relieved and bummed that the two did not get engaged, they did celebrate with cake and jewelry.

SOS: @CalvinHarris posted a video Snapchat with @taylorswift13 celebrating their one year anniversary together! 🎂 🌹 pic.twitter.com/w3qgbsa5R1

“We got a one-year cake, yay,” Harris is heard saying in a Snapchat that had the caption “1 year… that was easy,” as he shows off the — erm, cute, albeit not pretty — homemade looking chocolate-icing cake. He pans to Taylor, who nods excitedly. Taylor later shared a pic of an engraved gold heart locket. “3.6.15. One year down!” she wrote. Oh, young love!

2. Is Kim Kardashian going to break the Internet again? Kim posted a new naked (should we call this a #newnude?) photo of herself overnight, captioning the considerately censored pic, “When you’re like I have nothing to wear LOL,” and we’re ready to see if this breaks the Internet like her naked Paper magazine shoot in 2014. It’s likely this photo isn’t actually current; unless Kim went blonde again over the weekend (which, hey, stranger things have happened), it’s probably an older snap. Kim has repeatedly been open about her struggles with post-baby weight, so it’s possible she posted this as a personal #goals reminder. You go, Kim.

3. Beyonce crushed a cover of Whitney Houston’s “I Will Always Love You,” and no, we’re not crying, why?! Bey performed at the Center for Early Education’s 75th Anniversary Gala in Los Angeles on Saturday night, and along with killing her own hits in a stunning, sparkly, skintight mini number, she also belted out a Whitney (okay, technically Dolly) cover that gives us goosebumps. Us Weekly reports that the appearance was a surprise, and that the Center is actually Blue Ivy’s elementary school. If so, Mom of the Year Award, anyone? (h/t Us Weekly)

Did we mention that @MarthaStewart is in tonight's #syttd?! EEK! We can't wait!! pic.twitter.com/bZ6UifnSi8

4. Martha Stewart throws amazingly subtle shade on Say Yes to the Dress. Can you imagine going wedding dress shopping with Martha Stewart?! On the one hand, it seems like the perfect way to get no-nonsense, knowledgeable input. On the other hand, it seems like the kind of terrifyingly intimidating experience that would probably just make us cancel the wedding altogether in order to avoid it. On the season 14 premiere of TLC’s Say Yes to the Dress this past weekend, Martha accompanies her friend Bailey dress shopping. The first dress she tries on has a corset top that Stewart doesn’t love, and she doesn’t lie about it. “It’s gorgeous. I just think it’s a little rigid,” she says. Martha was also nervous about the experience, saying, “You have to tread lightly. You can’t say that’s a horrible dress that she’s already chosen.” Oh, wait — that’s exactly what she did. Amazing. (h/tJezebel)

5. Chrissy Teigen’s baby shower proved she and hubby John Legend will treat their girl like a princess. While we wait to learn the Obama-approved name of their baby girl, we’ll have to indulge in the photos from the NYC baby shower that Chrissy shared over the weekend. Full of amazing looking princess-themed sweets and, of course, crowns for the mom and dad-to-be that said “Baby Mama” and “Baby Daddy,” as well as their adorable dog Pippa (naturally), the party looked fit for a little princess — not that we’re surprised. “Luckiest girls around,” Chrissy captioned one of her snaps, followed by three old-school emoticon hearts. No kidding!

6. Quote of the day: “I am currently going through a rough patch with [my endometriosis] and my body (along with my amazing doctors) let me know, in no uncertain terms, that it’s time to rest… So many women with this disease literally don’t have the option of time off and I won’t take it for granted. Wishing you all health & happiness, in whatever form suits you.” — Lena Dunham shared this news just weeks ago. This past weekend, she had to be hospitalized and undergo surgery for a ruptured cyst. A good reminder to listen to our bodies. (h/t Variety)