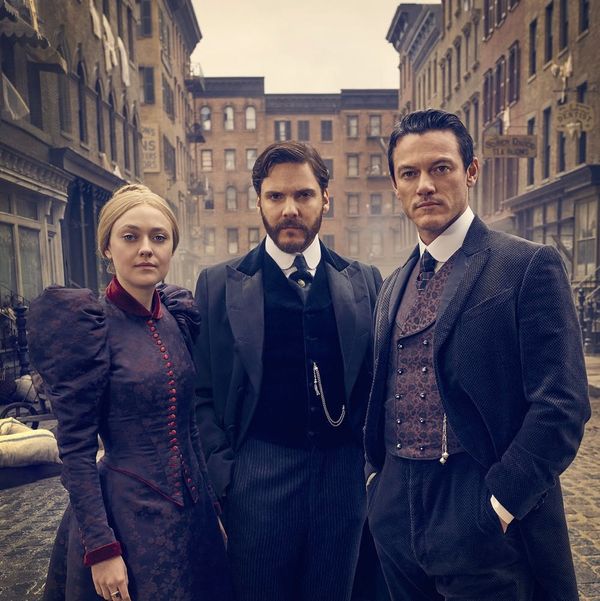 The show premieres Monday (January 22) and from what we’ve seen so far, it looks to be another solid drama for TNT’s slate. Here are five things to know about the series to help whet your appetite.

Caleb Carr published The Alienist in 1994 to critical acclaim, following it up with the sequels The Angel of Darkness in 1997 and Surrender, New York in 2016. Executive producer Jakob Verbruggen told Brit + Co at the 2018 TCA winter press tour that they wanted to ensure a faithful adaptation while still making a major change in from whose perspective the story is told.

“The Alienist stays very truthful to the book. I really do hope people who love the book will also embrace our series,” said Verbruggen. “The difference that we have is that the book is narrated by Moore’s character, so it’s through his eyes that we observe Kreizler and Sara. So [in the book] we don’t spend much time in Kreizler’s personal life, we don’t spend much time with Sara, so that is a freedom the [show] writers took, just to allow the audience to spend some more time in these characters’ private lives.”

2. There are real historical figures.

The case at the heart of the show is not based on a true story and the three main characters are fictional, but there are real historical figures included in the story, including the 26th president of the United States, Theodore Roosevelt — though he’s not president yet when the show begins.

“What’s very interesting is that in this show we really have Roosevelt’s origin story,” Verbruggen revealed. “Everybody knows the iconic character of Roosevelt, but this is before he becomes president, before he even runs for president, so we get a unique insight into moments in his life that aren’t actually that well known. He was police commissioner, he was fighting corruption in the New York police department.”

As you watch the show, you’ll notice how detailed the sets are. That’s not computer-generated magic. The show created a mini New York on the streets of Budapest, which is still very much “a brick city.”

“Budapest was built at the same time New York City started to get developed, so there are all these majestic surroundings that we could find in Budapest,” said Verbruggen. “But what we didn’t have there were the tenant streets. So because of TNT and Paramount, we were able to literally build the tenant streets. Our cameras could pan around 360 degrees, actors could walk anywhere they wanted because it was all real. [The production team] created this world where detail was key. In order to make the story believable it has to feel authentic, so we were all obsessed with detail and historical accuracy.”

4. The themes ring true even today.

He added that the show also touches on what were considered new, radical ideas at the time — “the birth of forensics, the birth of profiling” — and that period setting is also what makes the series so compelling.

“That’s key to making a series like this work, creating a time machine and bringing the audience onto the streets of New York and allowing the audience to go on a journey to the seedy underbelly of a city. I think that was key.”

5. They handled the crimes as delicately as possible.

If you’re worried about the crimes being too upsetting because they involve children, Verbruggen wants you to know that they handled the sensitive material as respectfully as possible.

“This show is about childhood and about how childhood meant something very different in the late 1800s than it does now,” he said. “But because it’s a serial killer series, we want to be shocking, of course, and confrontational, but we never, ever want to be exploitative. So there’s always respect. Whenever you write a scene or visualize it, respect is key and making sure it’s not exploitation. But we have to make it confrontational because we want to evoke a reaction or start a conversation with the audience.”

The Alienist airs Mondays at 9pm ET/PT on TNT.

Will you watch The Alienist? Tell us @BritandCo.

Andrea Reiher
TV critic by way of law school, Andrea Reiher enjoys everything from highbrow drama to clever comedy to the best reality TV has to offer. Her TV heroes include CJ Cregg, Spencer Hastings, Diane Lockhart, Juliet O'Hara, and Buffy Summers. TV words to live by: "I'm a slayer, ask me how."
TV
TV
TV
More From TV