The Amplifiear Amplifies Sound on Your iPad 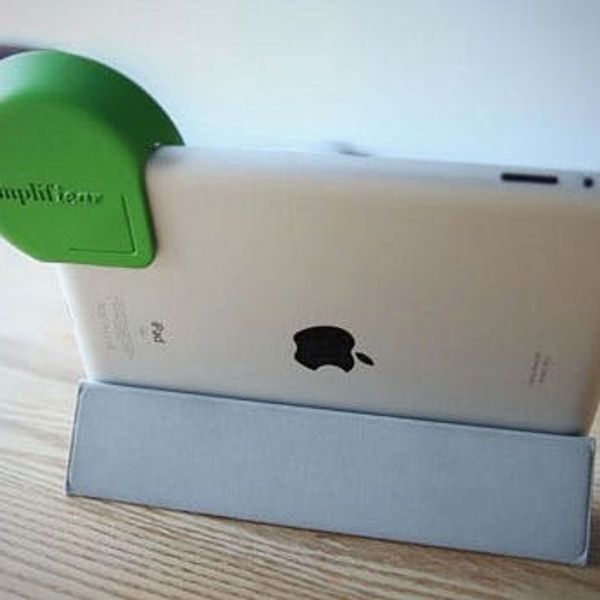 You've got an iPad, and you love the fact that you can watch media anytime, anywhere, on a pretty sizable screen. But what about that lo-fi sound? It's a bummer. With headphones it's all good, but when you're trying to share something with a friend or listen to something while doing something else, they just don't do the job. External speakers are ok, but they lack the portability that makes the iPad oh-so-convenient.

The Amplifiear was born in Brooklyn, while Nonlinear Design founder Evan Clabots was watching a film and noticed his iPad sounding better than usual. The streets were just as noisy, his studio mates were just as raucous, but there was a cardboard box sitting behind the iPad, reflecting the sound. Boom! An idea was born.

Now, how does it work? The coolest thing about the Amplifiear is that it's a tech gadget in the most low tech analog way possible. It simply clips onto the corner of the iPad and reflects and amplifies the sound coming from the back speaker. No more distortion when you're trying to hear something, or always turning the volume all the way up. For a $20 Kickstarter pledge, choose whichever color you like and prepare to revel in a serious sound upgrade.

And, the Amplifiear is downright quirky. It's colorful, has a comedic disposition (yes, inanimate objects can have dispositions), and pairs playfully with the sleekly designed iPad or iPad 2.

What about wanting to share videos with friends? Especially when you're on the go? The Amplifiear makes it ridiculously easy, and is virtually indestructible.

Think about all those times you've been cooking and wish you could refer to the latest Brit episode or are dying to catch up on Game of Thrones.

The prototypes you see here are 3D printed models that do the job for the time being, but will not be what funders receive. The full-tilt Amplifier will be made of ABS plastic that's much lighter than the 3D model, and recyclable. Throw it in your back pocket and prepare to get your sound on.

Anjelika Temple
As Co-Founder and Chief Creative Officer of Brit + Co, Anjelika Temple brings her voracious consumption of all things creative and colorful to DIY projects, geeky gadgetry finds and more. When she's not DIY-ing her heart out, you'll find her throwing dinner parties with friends or adventuring with her husband David, their daughters Anokhi and Indira, and their silly dog Turkey.
Kickstarter
Tech
Kickstarter
More From Tech