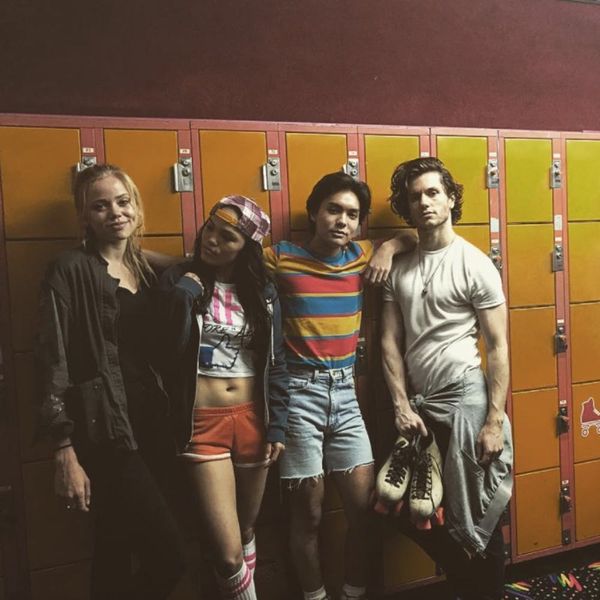 Fans of the iconic ’80s teen horror-comedy Heathers got a first look at the Winona Ryder movie’s television reboot this past weekend, and although it’s got a lot of differences from the OG movie, if the teaser trailer is any indication, this show is hitting the right chord with its slick, funny fierceness.

“Veronica, Heather Chandler is looking for you,” the trailer opens and we get our first look at the 2018 version of the meanest girls in school, Chandler (Melanie Field), Heather McNamara (Jasmine Matthews), and genderqueer Heather Duke (Brendan Scannell). With the same vibes as the original Heathers crew (Kim Walker, Lisanne Falk, and Shannen Doherty), this new twist on the iconic trio looks badass.

Of course, Veronica, played by actress Grace Victoria Cox, utters Ryder’s classic line, “Well f*uck me gently with a chainsaw.” If you’re unfamiliar with the classic movie starring Ryder, Doherty, and Christian Slater as Veronica’s boyfriend JD (played this time around by James Scully), it’s your classic coming-of-age-meets slasher flick filled with comedy and gore, with Veronica and JD exacting murderous revenge on the popular (and mean) titular girl gang after feeling like outcasts for long enough.

Fans of the 1988 movie don’t seem as excited about the reboot, however, taking to Twitter to express their frustrations with a show, “nobody asked for.”

Me after watching the trailer for the new Heathers TV show pic.twitter.com/5WzrKypVNJ

Wait heathers is getting a tv show?! Ooooohhhh noooo the musical is already a peice of crap no more please pic.twitter.com/fGQUrovkif

90% sure the Heathers tv show will be a dumpster fire. But you know I'll be there to watch it burn. pic.twitter.com/9A4T4IKYyC

Me because @MTV is making a Heathers TV show pic.twitter.com/C8i2mio8Uq

Premiering this fall on the Paramount Network (a rebranded Spike TV), the show is an “anthology series,” meaning, that much like American Horror Story, if Heathers gets a second season, it will feature a whole new cast of characters and stories, moving away from the cult classic.

Will you give Heathers a chance? Tell us @BritandCo.

Kat Armstrong
Kat has been a writer, social media maven and mom for longer than she's willing to admit. She's also spent time in front of and behind the camera, interviewing celebs, politicians and acting as a producer for fashion and artistic photography shoots. When she isn't writing for various orgs and publications, she's hanging with her kids, husband and French Bulldog, Peter, in Toronto, Canada.
Fall TV
TV
Fall TV
More From TV