President Trump Is Calling for an Investigation of Voter Fraud Claims 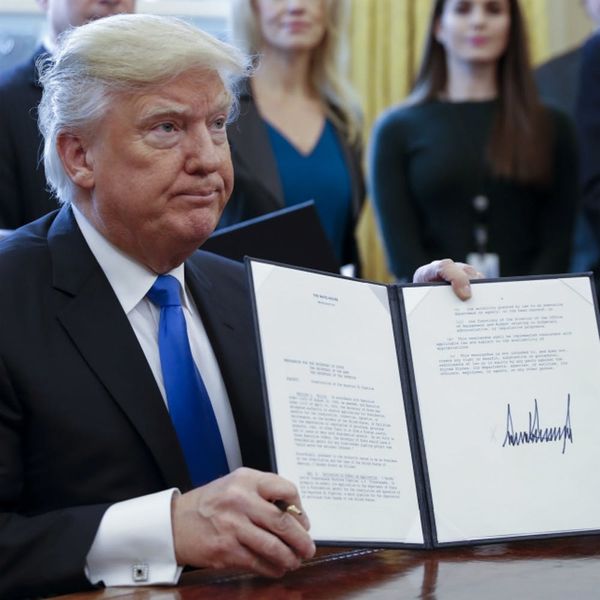 Since officially taking office less than one week ago, President Donald Trump has been pretty active in making good on the more alarming promises he made on the campaign trail, including those that would affect women’s issues and more. He immediately signed an executive order to begin the process of repealing the Affordable Care Act, and in subsequent days, has frozen funds for international agencies speaking about abortion, instituted a federal hiring freeze and signed orders to advance the development of both the Dakota Access Pipeline and the Keystone XL pipeline. He’s also continued to use his personal Twitter account to air his personal grievances, leading us up to his recent call to investigate widespread voter fraud (even though he won the election).

I will be asking for a major investigation into VOTER FRAUD, including those registered to vote in two states, those who are illegal and….

even, those registered to vote who are dead (and many for a long time). Depending on results, we will strengthen up voting procedures!

In a series of tweets, Trump claimed that he would be asking for voter fraud investigations, because according to him, two states in particular (which many are arguing are likely New York and California because of their strong Democratic leanings), fraud was rampant and that he would have won with a bigger margin if only it weren’t for all those millions of illegal immigrants and dead people casting ballots (we couldn’t make this stuff up if we tried).

While there are probably instances of voter fraud in every election, we’re not quite sure that spending millions of taxpayer dollars to try to prove it in this case is helpful — and his motive continues to remain unclear, considering that he won the election. His actions have some concerned that he’s using these accusations to undermine the voting process and take voter rights away from people who disagree with his policies (which, if true, would be flat out terrifying).

Bernie Sanders: "The great political and democratic crisis we face…is not voter fraud, it is voter suppression" https://t.co/eZUeTL8LVq pic.twitter.com/4qMOYEByzb

For what it’s worth, Senator Bernie Sanders is not having any of this, and he’s been very vocal about his feelings on the dangers of voter suppression and Trump’s language around the election. Hopefully, we can move on from this issue swiftly without voter’s rights being affected negatively.

Have you ever had problems trying to cast a vote? Tell us @BritandCo!