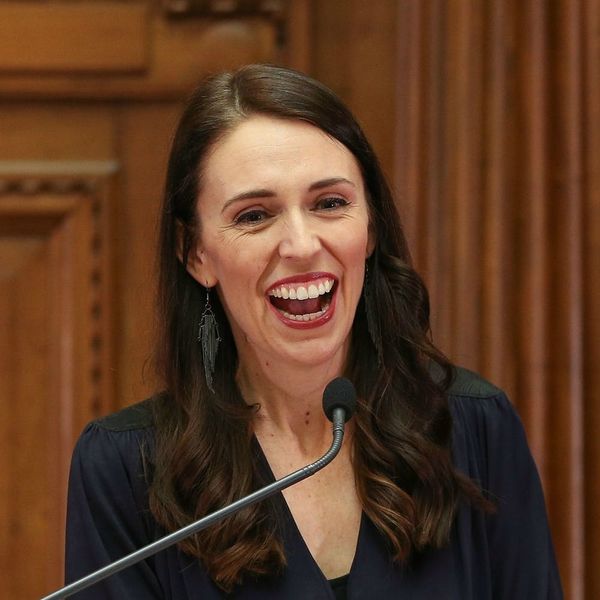 New Zealand’s PM has been breaking all sorts of barriers with her tenure. Once elected in October, Jacinda Ardern became the world’s youngest female head of government. Now the politician has announced her pregnancy, making her the first world leader since 1990 to give birth while serving in office.

Addressing the media in Auckland on Friday, the PM and her longtime partner, Clarke Gayford, shared the news that the first family would be expanding by June of this year. “I’ll be Prime Minister AND a mum, and Clarke will be ‘first man of fishing’ and stay-at-home dad,” Ardern said (Gayford hosts a cooking and fishing show for New Zealand TV called Fish of the Day, hence the fishing joke).

The pregnancy was a surprise for the couple, as Ardern told reporters they’d been told that they would need help in getting pregnant, although the news was definitely welcomed by the pair.

Ardern, a former DJ, was a long-term political activist for the country’s left-leaning Labour Party, and was elected her party’s head by unanimous vote last year. During her rise in politics, the country was gripped with “Jacindamania” over their love of their now-PM.

There is currently no word on if Ardern will take maternity leave, or for how long, once her baby arrives.

Have you ever gotten pregnant shortly after taking a new job? Tell us how it went @BritandCo!

Kat Armstrong
Kat has been a writer, social media maven and mom for longer than she's willing to admit. She's also spent time in front of and behind the camera, interviewing celebs, politicians and acting as a producer for fashion and artistic photography shoots. When she isn't writing for various orgs and publications, she's hanging with her kids, husband and French Bulldog, Peter, in Toronto, Canada.
Politics
Current Events
Politics Pregnancy Announcements