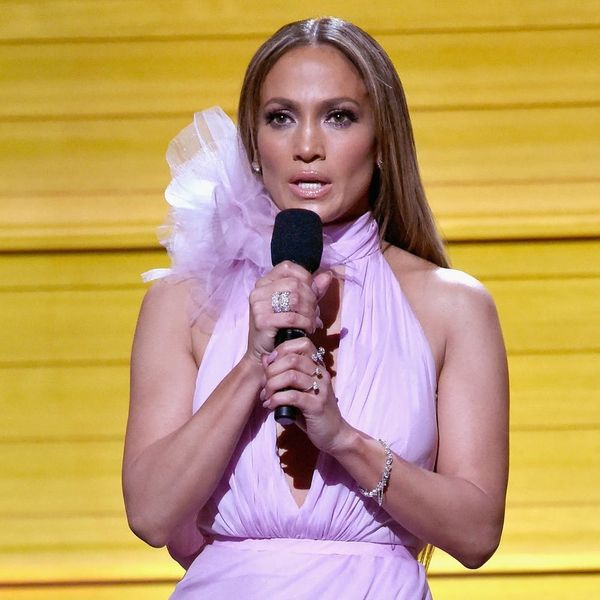 From nearly the moment the SAG Awards started, it quickly became clear that the night was about far more than awards for performance in movies and television, with political speeches all but taking over the event. At tonight’s Grammys, the air isn’t quite SO politically charged, but much like Lady Gaga’s Super Bowl performance, if you look close enough, it’s there.

While singer Joy Villa was all about President Trump on the red carpet, other stars, such as Jennifer Lopez, Paris Jackson and James Corden, had some *other* thoughts.

Host James Corden was first to break the political wall by working a foreboding joke into his opening monologue, rapping, “Live it all up, because this is the best and with President Trump we don’t KNOW what comes next!”

He was quickly followed by Jennifer Lopez, who quoted the words of Toni Morrison while presenting the award for best new artist to Chance the Rapper, saying, “At this particular point in time, our voices are needed more than ever. As Toni Morrison once said, this is precisely the time when artists go to work. There is no time for despair, no place for self-pity, no need for silence and no room for fear. We do language, that is how civilizations heal. So tonight, we celebrate our most universal language, music, as we honor the voices of the past and the present.” (Beautifully put.)

Paris Jackson gave a quick shoutout to the #NoDAPL pipeline situation, asking the audience to channel their energy into the cause. “We could really use this excitement at a Pipeline protest, guys.”

On the performance side of things was Miss Katy Perry, Hollywood’s most politically “woke” celeb, who not only performed her new hit, “Chained to the Rhythm,” (which includes such pointed lyrics as “So comfortable, we’re living in a bubble, bubble, so comfortable we cannot see the trouble, trouble”) but did so with a sparkly pink “Persist” armband on one arm and ended with a backdrop of the Constitution, of which the words “We the People” could be clearly discerned. Keeping with her message, Katy could also be seen shouting “No hate!” as she exited the stage.

She wasn’t alone, either: A Tribe Called Quest edged the evening’s political references from “subtle” to “blatant” as Busta Rhymes thanked “President Agent Orange” for “perpetuating all of the evil that you’ve been perpetuating throughout the United States,” he said before launching into a chant of “We the people” (which, incidentally, also just so happens to be the name of one of their songs). The performance ended with another chant from Q-Tip, this time of, “Resist! Resist! Resist!”

But the evening’s political peak seemed to come when Queen Bey accepted her award for Best Urban Contemporary Album for Lemonade. Taking the stage and reading from what appeared to be a solid gold book, she gave a speech that touched on the issues at hand, saying the following: “We all experience pain and loss and often we become inaudible. My intention for the film and the album was to create a body of work that will give a voice to our pain, our struggles, our darkness and our history, to confront issues that make us uncomfortable. It’s important to me to show images to my children that reflect their beauty so they can grow up in a world where they look in the mirror, first through their own families, as well as the news, the Super Bowl (you might recall Bey’s own political statement at the 2016 Super Bowl), the Olympics, the White House and the Grammys, and see themselves. And have no doubt that they’re beautiful, intelligent and capable. This is something I want for every child of every race, and I feel it’s vital that we learn from the past and recognize our tendencies to repeat our mistakes.”

What’s been your favorite moment of the Grammys so far? Share with us over @BritandCo.

Nicole Briese
Nicole is the weekend editor for Brit + Co who loves bringing you all the latest buzz. When she's not busy typing away into the wee hours, you can usually find her canoodling with her fur babies, rooting around in a bookstore, or rocking out at a concert of some sort (Guns N' Roses forever!). Check out all her latest musings and past work at nicolebjean.com.
Controversy
Entertainment
Controversy Grammy Awards Politics
More From Entertainment