This Is Us Season 1, Episode 16 Recap: Memphis 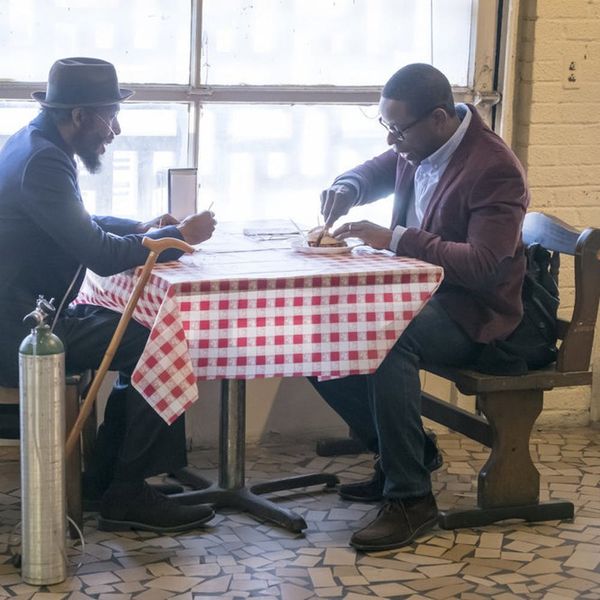 Fathers and sons are a huge part of the framework of This Is Us. We’ve seen how much Jack strived to be a perfect parent to Kate, Kevin and Randall in their early years. And since the pilot episode, we’ve seen Randall wrestle with becoming close again to his biological father, William — who is sadly on borrowed time. Basically, anytime fathers and sons are involved on this show, we can expect big emotional moments, and this episode was no exception. I’m so glad we got an episode just about Randall and his relationship with his father, even though the hour left me in a blubbering, wine-soaked mess. Sterling K. Brown and Ron Cephas Jones deserve every single award.

This trip into the past doesn’t start (or even end) with Rebecca and Jack. It goes back even further, and starts with William’s parents in Memphis. We see their pregnancy, and we see his father who goes off to the army when William is a baby…and then dies. Because everyone on this darn show is out to hurt me.

What a start. #ThisIsUs pic.twitter.com/u7F2xGFLQs

Years later, a teenage William is left alone in Memphis by his mother, but in a good way — she wants him to stay and focus on his music. Mom writes him letters, trying to encourage him to keep following his dreams, and promises to be back to see him play. We also meet William’s cousin, Ricky, who he plays in a cover band with at the local bar. Things seem to be really going well for William…at least, until mom calls. It’s clear something’s wrong, and even though we learn that she told him not to come, William leaves the club and his cousin and, to an extent, his music career. Trying to look out for her son, William’s mom encourages him to not sit with her in the house but ride the bus, instead. He does, and meets a girl named Laura, and one bus ride turns into a relationship. But Laura’s also friends with people who use drugs, and, well. After William’s mom dies, we see how he started his spiral into using. (It’s not actually confirmed, but we assume Laura is Randall’s mother.)

In the present day, Beth and Randall discuss with the psychiatrist whether or not Randall should take William to on a road trip to Memphis like he’s requested. Beth is understandably worried, for the same reasons we are. I mean, last we saw Randall, he was having a full-on panic attack — one that apparently led him to end up in the hospital. And according to Beth, he hasn’t even been out of the hospital for five days. But Randall advocates for himself. He’s taken time off work, he feels better, and he wants to do this. Randall wins his argument, and while Beth isn’t thrilled, she understands that this is important. I know everyone talks about Rebecca being the model mom and wife on this show, and for good reason. But really, Beth deserves props.

And so Randall and William set out on the great Father-Son road trip of This Is Us. And right away, we get some bonding in, when William (after throwing Randall’s maps on the window, who needs ’em anyway!) asks Randall about his breakdown. This leads Randall to talk about how he always put too much pressure on himself, from the time he was a little kid. The difference between then and now? Jack was always there to help him. It’s clear how much Randall respected his dad, calling him “larger than life.” And we also get a small tidbit of info to add to the “Jack’s Death” puzzle — while Kate kept the cremated ashes (which we knew), the rest were spread at his favorite park and it’s where the children consider his “real” resting place. Naturally, William is all for making a detour to said park. Randall tries to dissuade him, but as we’ve learned, William doesn’t get deterred that easily. And so we get one of the first tearjerker moments of the night: William sitting alone and telling Jack, “thank you for doing what I couldn’t. For raising him to be the man he is. I’m sorry I didn’t get a chance to meet you. I would have liked to have heard that laugh. I would have liked to have met my son’s father.”

After a brief stop at a motel, Randall asks William if he’s ready to go back to Memphis. Heck yes, he is. William can’t stop pointing out all the old places he used to frequent, and they eventually end up at William’s old house. A nice couple allows them inside, where William promptly removes a brick in the fireplace where he’s stored old toys. The two most important things to come out of this moment: we learn Randall had a fro (NEED. PICTURES. NOW.) We also learn that Sterling K. Brown and Ron Cephas Jones are the ultimate dream team of everything from comedy and feels.

After a stop at the barber shop, William goes back to his old bar. Cousin Ricky is NOT happy to see him, and we learn why: he resents the fact that William never came back like he promised. But once William tells him the whole story about what really happened when he went home, Ricky softens and invites Randall to play with him again. He’s so happy. Everyone is so happy! Randall is meeting all his second and third cousins he didn’t even know about (“you get a cousin, and you get a cousin, and you get a cousin!” It’s so nice to see Randall cutting loose, really.) William is playing the piano on stage. Beth calls and gets a happy, joyous response from her husband. Everyone’s so happy…

…and we know things can’t stay happy. Sure enough, when Randall goes to wake up his dad the next morning, he finds he’s rapidly deteriorated. One call to 911 later, and William is in the hospital with the doctor telling Randall that he has hours, at most — and he’s not leaving the hospital. This is when our hearts break by realizing William probably wanted to go to Memphis to die there. And so Randall ends up at his father’s deathbed, alone, and while it’s devastating, maybe it’s what he deserves. After all, you can’t quite break the bond between a father and a son, and William deserves to have his son’s undivided attention and love in his final moments.

Last rites are read. William gives Randall a gift: Poems For My Son, by William Hill. And yeah, we’re crying, because we know what’s happening. And like William, we also know there’s nothing we can do to stop it. He admits he’s scared, and so Randall uses Jack’s tactic of calming him down — two hands on either side of the head, just breathe — to help him as he dies. And as we cry even more, we see flashes of William’s life, of Randall’s life with his father, and finally, seeing his mom again.

Randall returns home alone. But he rolls down the windows (just like dad taught him), turns up the music, and appreciates life. Because that’s what This Is Us is all about, right? Living life. Appreciating life. And not being afraid to show emotions.

(No Pearson Points this week, due to the focus of the episode. But also because I’m kind of emotional.)