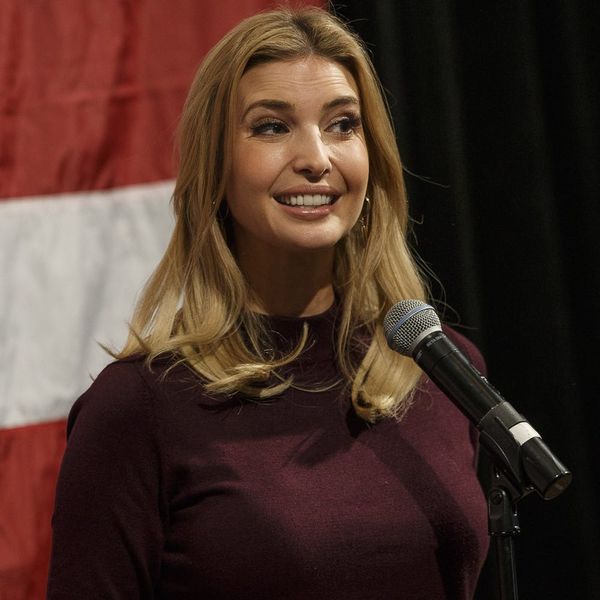 Despite the fact that Ivanka Trump stepped down from her fashion brand back in early January to comply with ethics laws, her fashion lines have undoubtedly taken a major hit as of late, with reports running rampant that stores such as Nordstrom, Neiman Marcus, TJ Maxx, and Marshall’s had all axed them from their shelves.

While Ivanka’s team sought to clear the air, saying that Nordstrom actually HAD purchased apparel from her spring line for its online space, other reports are claiming that nearly half of her products available for purchase online have been discontinued.

But not ALL Ivanka products are seeing heavy sales declines: In fact, one item’s sales in particular are soaring through the roof. Apparently, Ivanka’s Eau de Parfum spray, Ivanka Trump ($39-47), is practically flying off the shelves at Amazon, where it’s in the top spot for best selling women’s fragrances. What’s more, her rollerball spray (now out of stock) sits at #2, with resold versions of the fragrance coming in at spots five, 10, and 12.

So what gives? As Refinery 29 points out, a quick glance at the reviews shows that women (and men) are turning out in droves to show their support of the former entrepreneur, saying things like, “Amazon better stock up! Millions of American women LOVE Ivanka Trump…,” “Bought this perfume when all the anti-Ivanka stuff started,” and “Just purchased this perfume to show my support for Ivanka Trump. Several of the reviews were obviously written by nasty hateful people.”

Huh! Looks like this is one retail war that’s not over yet…

Are you disheartened to see the brand getting support or happy people are answering the backlash? Share with us @BritandCo.

Nicole Briese
Nicole is the weekend editor for Brit + Co who loves bringing you all the latest buzz. When she's not busy typing away into the wee hours, you can usually find her canoodling with her fur babies, rooting around in a bookstore, or rocking out at a concert of some sort (Guns N' Roses forever!). Check out all her latest musings and past work at nicolebjean.com.
Beauty Products
Politics
Beauty Products perfume Politics
More From Politics