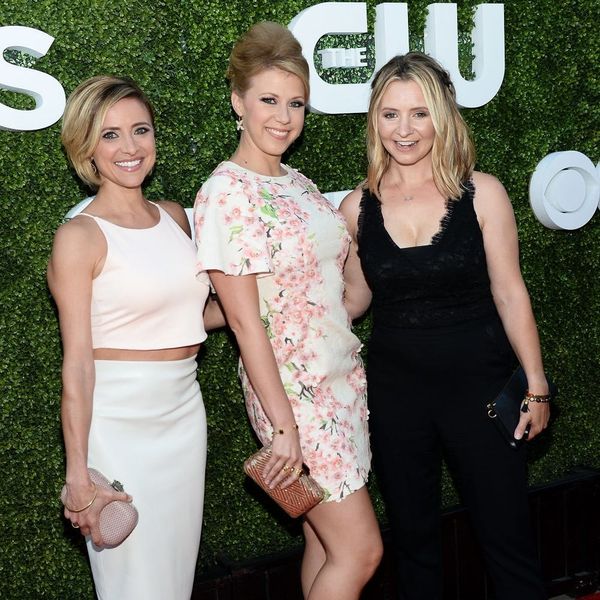 It’s been a rough few months for Jodie Sweetin, who not only called off her engagement but also had to endure a super scary situation where she was forced to take out a restraining order against her ex (which he promptly violated). But now, it looks like the Fuller House star has something to look forward to, as she and two of her besties (who also happen to be former ‘90s actresses) are teaming up for a hilarious sitcom which is sure to be your fave new source of parenting and nostalgia-related laughs.

TV fans who grew up in the ‘90s will surely recognize not only Jodie Sweetin but also her IRL besties, Beverley Mitchell (Lucy Camden from 7th Heaven) and Christine Lakin (Al Lambert from Step by Step). Now, all in their thirties, their lives are much different from back in the day, which is why they’re the perfect trio to star in Hollywood Darlings.

Loosely scripted with the actors improvising many of their lines, the ladies will be bringing their own experiences into the show, though, according to NYPost Jodie Sweetin admits, “We wanted it to have the feel of a sitcom. We wanted people to realize this is not our real life; it’s not reality. We wanted it to be very fun, ridiculous, over-the-top-silly.”

Get in a '90s state of mind. Watch this sneak peek of #HollywoodDarlings now! New comedy premieres tomorrow 8P/7c on @PopTV.

As if the three stars weren’t enough to get us super excited about this new show, the ‘90s-nostalgia-filled guest list may totally put us over the top. Get ready to see Andrew Keegan (10 Things I Hate About You), Andrea Barber (Full House), Tamera Mowry (Sister, Sister), Jaleel White (Family Matters), Soleil Moon Frye (Punky Brewster), and even *NSYNC’s Lance Bass. “It was really fun,” said Beverley Mitchell, adding, “It brought back what we all got into this business for in the first place.”

Premiering Wednesday at 8pm on Pop, we can’t wait to see what these Hollywood Darlings are up to these days.

Are you excited to check out Hollywood Darlings? Let us know @BritandCo!