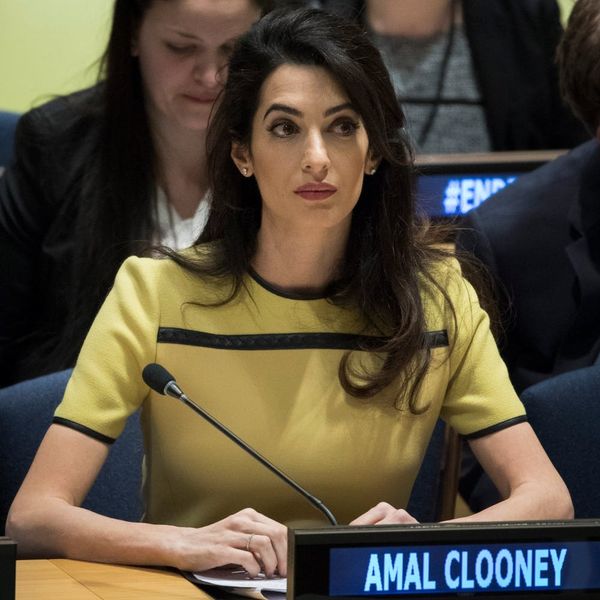 When Anne Hathaway stood up in front of the United Nations yesterday, she spoke about the issues around parental leave, using her own experience in a very honest way to relate to the struggles others face. Amal Clooney also took to the podium to deliver a powerful speech about ISIS. Unfortunately, TIME decided instead to focus on her slightly visible baby bump, and folks are seriously upset.

“The mom-to-be (who also happens to be married to George Clooney) stepped out outside the United Nations headquarters in New York City on Wednesday, showing off her baby bump in a dark gray pencil skirt and matching cropped blazer,” said the piece by People, which was then published on TIME Motto. Though a perfectly accurate description of Amal Clooney’s outfit on International Women’s Day, folks were more than just a little upset over the fact that TIME chose to focus on Clooney’s appearance as opposed to the important message behind her speech on Thursday. And it wasn’t just the article that did so.

Amal Clooney shows off her baby bump at the United Nations https://t.co/0Vkr8aad1D

TIME’s tweet narrowed things down even more, focusing solely on her baby bump and not even bothering to mention the topic of her speech.

Readers were quick to tweet their own thoughts on the sitch…

@TIME You gotta be so embarrassed for this. She is a world-renowned human rights lawyer.

@TIME seriously?She is a world renowned #humanrights lawyer,delivering a powerful speech at #UN & you a NEWS magazine, talks about #babybump

@TIME That's all you guys have to say about an intelligent woman speaking out on atrocities in the world?

@TIME she was talking about sexual slavery and Isis.

@TIME seriously? She was at UN giving speech about genocide not "showing off her baby bump". Get your shit together

Watch Amal Clooney’s speech for yourself and decide if you’re more impressed by her outfit and baby bump or her speech.

What do you think about the fact that TIME’s tweet focused on Amal Clooney’s baby bump as opposed to her speech? Let us know @BritandCo!

Desiree O
Desirée O is a ‘Professional Bohemian’ who loves anything and everything related to the arts, entertainment, and pop culture. She ADORES being a ‘Newsy’ for Brit + Co, covering all of the latest tidbits of awesomeness that you want to read about. When she’s not writing, she’s either making messy art, going on long adventurous walks with her camera, or poking around over at bohemianizm (http://www.bohemianizm.com/). You can find out about Desirée O and her work at http://DesireeO.com/ or follow her on Twitter @DesireeO.
Politics
Celebrity News
Politics twitter