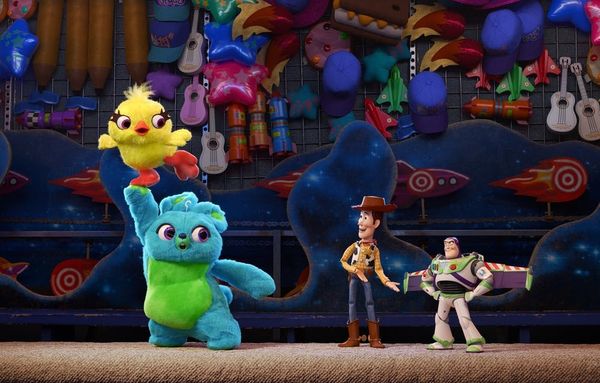 Toy Story unveiled the first look at its highly anticipated fourth installment just one day ago, and now the beloved Pixar franchise has followed that up with another short teaser introducing two more new characters we already love.

Ducky and Bunny are — you guessed it — toys, a stuffed yellow duck and a stuffed blue bunny, who are prizes waiting to be won at a carnival. The second teaser trailer opens with the two pals sitting around and talking about Toy Story, breaking the fourth wall as Bunny asks Ducky, “Did you see the new movie trailer? You ain’t see it? Ducky, they’re making another Toy Story movie!”

“No! I thought those movies were done, dog!” Ducky replies. “They made three movies!”

“They did make three movies,” Bunny says. “This is number four.”

The two stuffed pals get excited, calling Toy Story their “jam” and imitating some of the film’s most enduring catchphrases. When it comes to Buzz Lightyear’s iconic “to infinity, and beyond,” though, they’re a little off. Bunny thinks it’s “to infinity and your mom,” while Ducky is pretty sure it’s “to insanity and a blonde.”

It doesn’t take long for the film’s original toys to correct them. “Hey, hey, guys! You got it all wrong,” Woody says, walking into the frame alongside Buzz, who happily says the correct catchphrase.

The two newest characters are voiced by the hilarious comedy duo of Keegan-Michael Key (Ducky) and Jordan Peele (Bunny). In the first teaser trailer, released on Monday, November 12, another new character named Forky (voiced by Tony Hale) was also introduced.

Are you excited for Toy Story 4? Let us know @BritandCo!