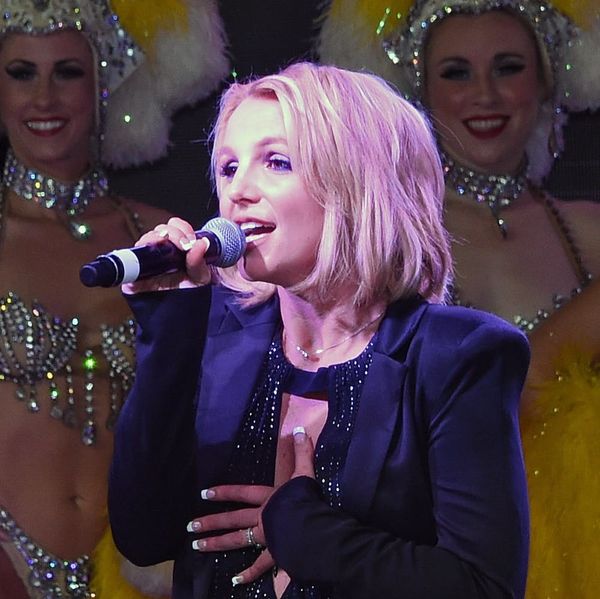 Channing Tatum, amateur photographer extraordinaire (have you seen Channing’s photos of Jenna?), set tongues around the world wagging with the announcement of an impending Magic Mike LIVE residency in Vegas. There’s just one teensy, tiny problem: It won’t debut until March 2017. Womp, womp. That’s a long time to wait when you’re all revved up and ready for an adventure now! Never fear. While we’re collectively waiting for Channing’s shirtless friends to take the stage (and the Backstreet Boys too, for that matter!) we’ve compiled a list of Vegas shows so good, you’ll want to book the next flight out to catch them. Read on to see which shows made the cut!

1. Britney: Piece of Me ($55 – $435+): Like we wouldn’t include Miss Britney Spears on a list of Vegas must-sees! Practically the unofficial mayor of the Sin City ( I mean, the woman has her own freaking holiday, as well as the key to Las Vegas!), Ms. Spears has been steady running things since 2013, when she made the city home to her Britney: Piece of Me revue. Though we’ve always loved Brit-Brit (yes, even 2007 Brit Brit), we can’t imagine anyone not jumping at the chance to see the pop performer at her peak. She performs all of the hits you loved as a teen, amping them up with elements such as, oh, you know, fire, flying, the usual! Brit brings it at. Every. Single. Show. And who knows? Maybe you’ll get lucky and happen to catch a Britney and Justin Timberlake reunion as well! (Photo via Planet Hollywood)

2. Absinthe ($99 – $130): The show’s tagline pretty much says it all: “If you only see one show, make it Absinthe.” Pegged as a cross between cabaret and acrobatics, this adults-only performance blends a bit of everything Vegas has to offer, with awe-inspiring acts like burlesque dancers, tight-rope walkers, comedians, aerialists and more. (Photo via Absinthe)

3. 53X ($40 – $60): Created by the producers of Chippendale’s, ­­this is the show all the single ladies looking to swoon over hunky shirtless males are going to want to attend. And best of all? There’s something for just about everyone to ogle. Featuring male, female and even drag queen performers (Shangela from Rupaul’s Drag Race is the host), there’s no shortage of eye candy to behold, making it the perfect pick for any rowdy bachelorette parties. But do be warned, ladies — there is (gulp!) some audience “participation” involved! (Photo via 53x)

4. Terry Fator: The VOICE of Entertainment ($65): Those with a less, um, scandalous appetite can check out Terry Fator: The VOICE of Entertainment at the Mirage. The former America’s Got Talent ventriloquist (along with 16 of his dearest puppet friends) will both make you laugh and impress you with his range of vocal impression abilities: Everyone from Garth Brooks to Lady Gaga is parodied with hilarious results. (Photo via Ethan Miller/Getty)

5. Cabaret ($29 – $129): Every local we polled unanimously highly recommended catching a show — any show — at The Smith Center for the Performing Arts. Though the venue’s Broadway season is quickly coming to a close, there’s still time to catch one of the biggest Broadway blockbusters of all time as interpreted by The Roundabout Theatre Company: Caberet. Running from June 14 to 19, the Tony-winning number (now in its 50th year anniversary!) is the original Burlesque (you know, that overwhelmingly underrated Christina Aguilera flick with Cher and Kristin Bell?), following performers attempting to escape their troubles through their chosen artform in a pre-WWII Germany. (Photo via Cabaret Musical)

6. The Beatles LOVE ($79+): Produced by George Martin (who produced a good number of actual Beatles records) and his son, the revue (now in its 10th year), can be appreciated by Beatlemaniacs and non-maniacs alike. Sampling more than 100 of the famous quartet’s best works throughout the performance, the show uses the music as a soundtrack to what is meant to be a timeline of the Beatles real history — with some insane acrobatics and aerial skill thrown in for good measure. (Photo via Cirque du Soleil)

7. Le Rêve: The Dream ($105 – $205): While it’s one of the more pricey options on our list, the photos from Le Rêve: The Dream alone are enough to blow our minds. Inspired by Picasso’s art piece of the same name, the show is an underwater spectacular that takes place in a — get this — 1.1 MILLION gallon tank of water. What? Produced by a former Cirque vet, it’s got all the elements of acrobatics and aerials you’ve come to expect, plus synchronized swimmers, high divers and more. (Photo via Wynn Las Vegas)

8. David Copperfield ($71+): While there are plentyyyyyy of amazing magic acts to catch in Vegas, our money’s on the guy commonly hailed as “the greatest illusionist of our time.” While there’s quite a bit of mystery surrounding the actual show (all the better to amaze you!), any man that can levitate over the Grand Canyon as Bonnie Tyler sings I Need a Hero (so ‘80s, yet so, so glorious!) gets a pretty solid nod from us. (Photo by Brandon Thorne/Getty)

9. O ($99+): This Cirque du Soleil masterpiece “defies description,” according to the Chicago Tribune, but from what we can gather, it’s an underwater spectacle rival to La Rêve: The Dream. In fact, the name is actually a nod to eau, the French pronunciation of water. Featuring a whopping 85 performers, this large-scale production definitely makes a splash. (Photo via Cirque du Soleil)

Which of these shows are you most excited to see? Let us know over @BritandCo!