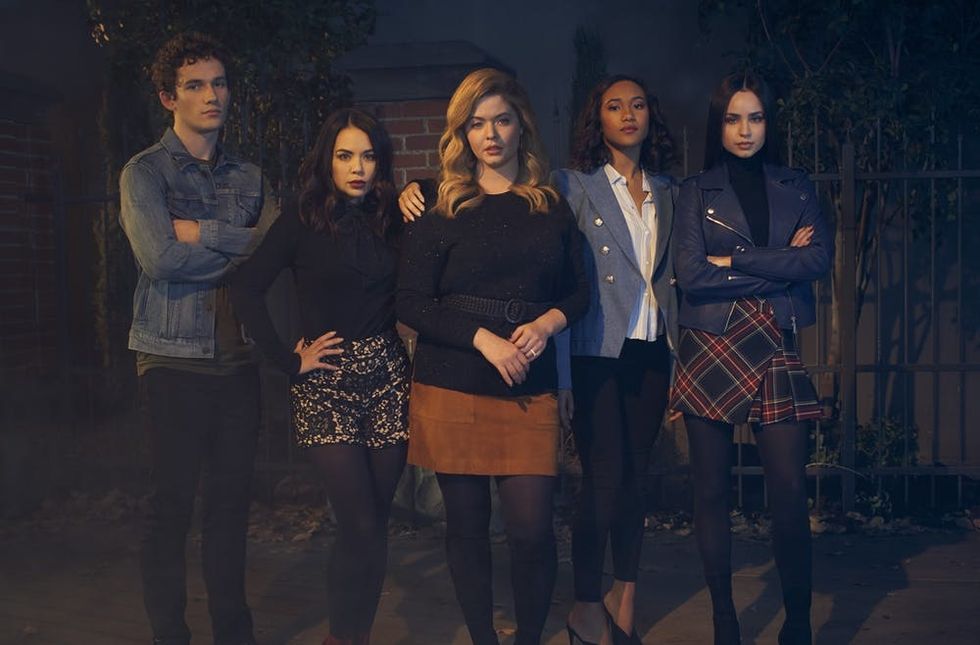 Welcome to Brit + Co’s Weekly Entertainment Planner! Each Monday, we highlight one thing we’re excited about in six categories — movies, TV, music, streaming services, podcasts, and a bonus pick from all of the above — to help you navigate your week in watching and listening. Check out our picks for the week of March 18 to 24 below. Your eyes and your ears will thank us!

Us (March 22): Jordan Peele’s last movie, Get Out, was one of the best movies of 2017, so we’ve been excitedly awaiting his follow-up — and man, does it look creepy. Proving himself a modern master of psychological horror, Peele directs Winston Duke and Lupita Nyong’o as a husband and wife who find themselves being hunted by strangers who look exactly like them and their kids. It sounds like a nightmare (but one we can’t wait to watch). Check it out in theaters starting Friday, March 22. (Photo via Claudette Barius/Universal Pictures)

Pretty Little Liars: The Perfectionists (March 20): Almost two years after the Pretty Little Liars finale, its spinoff/sequel is finally here. Like its predecessor, The Perfectionists is based on a book series by author Sara Shepard. This one follows three high-achieving college friends in Beacon Heights, an idyllic-seeming town hiding some dark secrets. PLL stars Sasha Pieterse and Janel Parrish reprise their roles as Alison DiLaurentis and Mona Vanderwaal, and the 10-episode season kicks off on Freeform on March 20. (Photo via Freeform/Kurt Iswarienko)

Amy Schumer: Growing (March 19): Amy Schumer has had a busy two years since her last Netflix special, 2017’s The Leather Special. Not only has she gone on to star in several more feature films, but she got married and is expecting her first child. These personal changes inform much of her latest hour-long set, Growing, which arrives on Netflix on March 19. (Photo via Elizabeth Sisson/Netflix)

Invisibilia, Season 5: The beloved NPR podcast returns for a fifth season, which they’re billing as a “survival guide” for the current state of the world. The six new episodes will look at the opioid crisis and our “culture’s relationship with pain,” what it feels like to lose and try to gain control of every aspect of our lives, and more — all with a scientific slant, of course. Listen online, or subscribe wherever you get your podcasts.

Ariana Grande’s Sweetener Tour Kickoff (March 18): Two years after the devastating attack at her Manchester concert, Grande is going back on the road with her massive Sweetener world tour, which kicks off Monday, March 18, in Albany, NY. While the tour is meant to support her chart-topping August 2018 album of the same name, fans will no doubt also be treated to lots of material from her most recent album, Thank U, Next. (Photo via Kevin Winter/Getty Images for iHeartMedia)

Outer Order, Inner Calm by Gretchen Rubin: Hot on the heels of the massive success of Marie Kondo’s Netflix series, Tidying Up, comes a new book from Gretchen Rubin, the best-selling author of TheHappiness Project, to further help you organize your life. Outer Order, Inner Calm includes insights into the challenges of keeping a tidy space, as well as manageable steps to make it happen in your home. It’s the perfect book to read as spring-cleaning fever sets in.