Does Your Active Tinder Profile Count as Cheating? An Expert Sounds Off 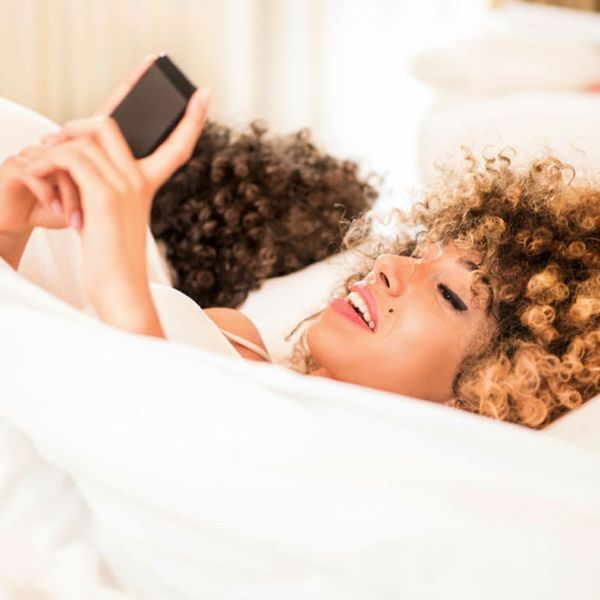 Long past are the days of trying to snag a date solely by winking at strangers in bars. Dating apps are a mainstay in American dating culture. One in five adults 25-34 years old have online dated, according to Pew Research’s 2015 report. If you’re looking for a long-term partner online, great news: Online daters actually tend to be more open to committed relationships than people who aren’t actively looking online.

The bad news (you knew it was coming): The horror stories of finding out those perfect-seeming matches aren’t really available. In fact, 42 percent of Tinder users are already hitched or in a relationship, according to a GlobalWebIndex survey. We asked Katherine Schafler, a licensed psychotherapist and emotional health expert in New York City, if there’s any harm in still looking — and maybe flirting a little — online, as long as you don’t have any intention of physically cheating.

Does Swiping and Messaging Count as Cheating?

Online flirting, aka engaging on dating sites, but not meeting up with anyone in person, may seem like a gray area. Not the case, according to Katherine, who says the situation is usually black and white. “An active online dating profile while you’re in a committed relationship is a form of infidelity,” says Katherine. “Obviously some couples have different rules about the openness of a relationship and fluidity of commitment, but usually it’s absolutely reasonable to feel ‘cheated on’ if you discover your partner is active on these sites.”

Why are people in relationships using Tinder and Match.com?

The old excuse, “it’s not you, it’s me,” actually rings true in the case of online flirting. Sure, online dating apps are an efficient way for someone who doesn’t have both feet in the relationship to keep shopping around, but key motivators are often separate from the relationship.

Katherine says someone’s emotional issues, like a belief that they don’t deserve real love or will disappoint their partner, drive a digital-age form of self-sabotage. “Self-sabotage happens every day. A lot of people in great relationships engage in frivolous online flirting with strangers when they encounter the chance at quality intimacy in their current relationship.”

And let’s be real: Even singles use dating apps for mindless entertainment (and maybe an ego boost). If you’re partnered up, you could be hooked on the gamification element of the apps without having any intention of cheating. Still a definite no-no, says Katherine. “To change the habit, find something else that’s just as easily accessible and also entertaining, like a game on your phone.”

How to Stop Online Flirting in Your Relationship

Boost your chance of dating apps being a non-issue by communicating your needs and, specifically, your stance on online dating. “Be clear with your partner about your online boundaries and expectations. For example, you can say something like, ‘I don’t visit dating sites anymore, and naturally, I expect the same from you. I just want to check in to make sure you’re on the same page,’” Katherine suggests.

When Should You Delete Dating Apps?

No need to scour your phone to delete all the dating apps you used before meeting your sweetie, as long as you aren’t using them. If you see your partner still has a dating app installed, don’t jump to conclusions — a lot of people don’t think about the countless apps on their phone enough to curate them that carefully. But, there will come a time in your relationship when you should delete all dating apps and accounts, says Katherine. “If you take your commitment to the level of moving in together, getting engaged or married, any app in sight is going to cause Drama with a capital D. Those next-level phases are when it’s reasonable to expect dating apps to be deleted.”

What phase in a relationship do you delete dating apps from your phone? Or as long as they go unopened, do you just let ‘em be? Tweet us @BritandCo and let us know!

Whitney Akers
Whitney is a writer that's equally drawn to the energy of a big city and the peacefulness of the Redwoods. If she's not lucky enough to be on an international adventure, you'll find Whitney enjoying all the urban hikes, used bookstores and fancy cocktails San Francisco has to offer.
Apps
Relationships
Apps Dating love
More From Relationships