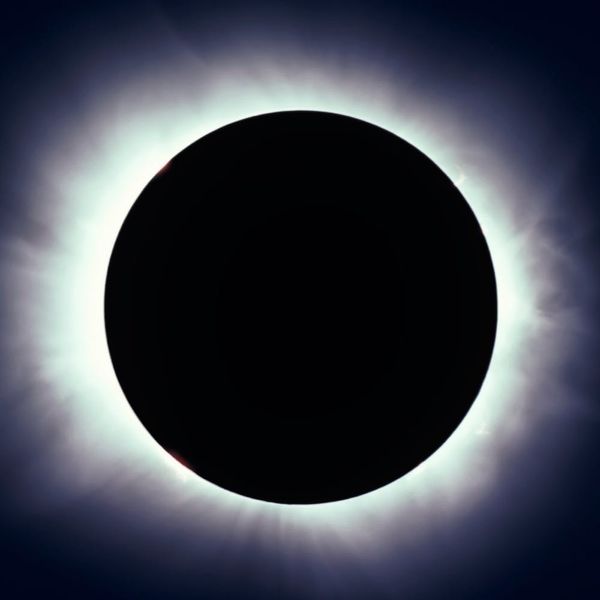 When the universe decides to put on a once-every-several-decades show, you better believe we’re going to be there for it — even if the party only lasts about two minutes. On August 21, Americans will be treated to a total solar eclipse, when the moon covers most of the sun, exposing its fiery corona and casting an eerie, filtered glow. During this time, temps drop by about 10 degrees and the stars become visible midday (the last time this happened in the US was 1979!).

This go-around is extra special because, for the first time in 99 years, the phenomenon will cross the entire country (road trip, anyone?). Although parts of what is being dubbed as the Great American Eclipse will be visible throughout the nation, you’ll only witness the full effect if you’re in its direct path. Luckily, science tell us exactly where that is and how long it will last at each spot. One thing you can’t account for is the weather, so prepare to be mobile if you have to decamp to a neighboring locale with a better forecast on the days leading up to the event. We studied GAE’s map and dialed into the seven best sites to catch the celestial wonder.

1. Dubois, WY: Jackson Hole is the place to be in the summer, so space will be extra tight in August when the eclipse passes straight overhead. Though Casper, three hours east, is throwing a big party too, your best bet for access is going to be a place like Dubois (population 971). Sitting at 7,000 feet, the cowboy town has no pollution, is predicted to have the least chance for cloud cover around, and gets you up high, that much closer to the sky.

2. Nashville, TN: There’s no party like a Southern party, and the music capital of the region is pulling out all the stops to welcome the festivities. The biggest event will be at First Tennessee Park, where the baseball team will join up with the local science center and city to host a soiree complete with a show by the Nashville Symphony (epic view, epic music). Or maybe you want to welcome the moon with some day drinking at a rooftop bar (Virago, Acme Feed & Seed, and UP are all good choices). Accommodations will also be hard to come by here, but hopefully, you can count on a hospitable Southerner to put you up for the night.

3. Shawnee National Forest, IL: To maximize viewing potential, head to Southern Illinois, where totality is expected to last two minutes and 41.6 seconds — the longest in the country. This area also has high odds for clear skies. Double win! Head into the 280,000-acre national forest and plant yourself at its Little Grand Canyon to claim the best seat. Get there super early though.

4. Hopkinsville, KY: This town is so proud of its two minutes and 40 seconds totality that it has rebranded itself as Eclipseville for 2017. On the site, you’ll find info on hotels (don’t bother — rooms have been booked for years), campsites (better chances), and homes for rent (prices may be steep); events taking place around town, including the Comic-Con-like Eclipsecon, where The Walking Dead’s Santiago Cirilo is expected to appear; and the vantage points (we recommend Casey Jones Distillery, so you can also get a taste of Kentucky’s famous brown water).

5. Columbia, SC: Nearly two million people are expected to descend upon South Carolina, the only eastern seaboard state on the path of totality, in August. The capital city welcomes guests with more than 50 space-themed activities, including plays, a baseball game, art shows, and symphony concerts. If you can’t find a place to stay, get a hotel in nearby Lexington and drive in for the day, or if you have the right connections, shack up with a friend in Charleston, the eclipse’s farewell site, where the party is sure to be a doozy.

6. Madras, OR: Many say Oregon’s High Desert region will be hands-down the place to watch (this is where the action starts, and the flat-land-meets-mountain backdrop is hard to beat). To celebrate, Madras is hosting Oregon Solar Fest, a six-day event in collaboration with NASA and featuring heli-tours of the area, hot air balloon rides, and music.

7. Grand Island, NE: Right in the middle of the Cornhusker State and on the path of totality, this prairie town is a sure bet for anyone traveling from South Dakota, Minnesota, Kansas, and other Midwestern states. The Stuhr Museum, celebrating its 50th anniversary this year, has expansive grounds on which to take in the sight, plus viewing glasses, reenactments of the area’s frontier days, and a NASA balloon launch to collect data from the phenomenon.

Where are you planning to watch The Great American Eclipse? Tweet us @BritandCo!