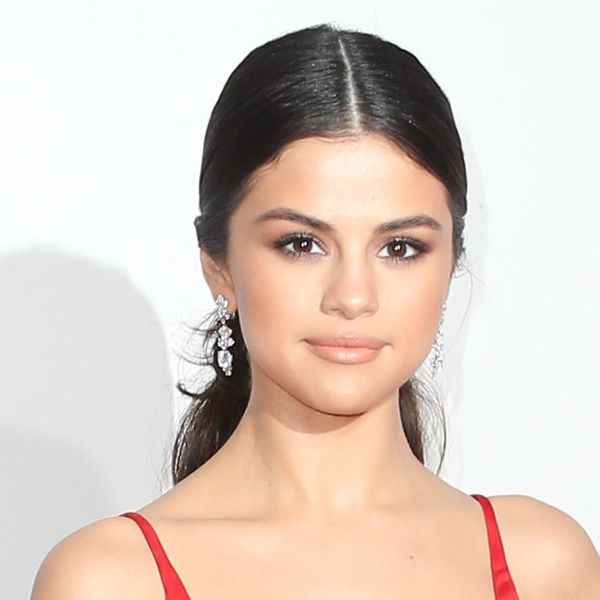 Today at Netflix’s press event in Manhattan, Selena Gomez appeared as part of a panel to promote her upcoming show 13 Reasons Why, a Netflix original that’s based off a YA novel of the same name with a cult following. This time, however, the singer won’t be appearing in front of the camera but as an executive producer instead.

The show is centered around the very heavy subject of teen suicide, and it’s a subject matter that no one involved with the project takes lightly. “To be frank with you, I was actually going through a really difficult time when they started production,” Selena told the audience. “I went away for 90 days and I actually met tons of kids in this place we’re talking about with a lot of the issues these characters were experiencing.”

For Selena, growing up in the spotlight was no easy task. “There were adults who had the audacity who were telling me what I should do with my life. It was very confusing for me. It was so confusing. I had no idea what I wanted to be and what I was still going to become,” the “Kill ‘Em With Kindness” singer said, which is why being a part of 13 Reasons Why was so significant to her. “It definitely hits home, and it’s why I wanted to make sure I was a part of this project in any way, even though I wouldn’t let anyone take that away from me.”

As a celebrity with a legion of young fans, throwing her weight behind this project was almost an act of love for them. “We’re not gonna post things that say, ‘Hey, be empowered!’ because that’s not what they want to see. Unfortunately, kids don’t care. They need something that’s going to shake them. They have to see things that are frightening,” she said. “I would do anything to be a good influence on this generation.”

“That’s why I am glad we took so long to make something like this,” Selena concluded, “because we made something really great.”

Will you be watching 13 Reasons Why? Tweet us @BritandCo!

Kimberly Wang
Kimberly Wang writes about all things pop culture, tech, style, and beauty. She's a Bay Area transplant and has an MFA in Creative Writing from Columbia University. On a sunny New York day, you can find her hanging out with her mini schnauzer Isabelle Jellybean on a blanket in Central Park.
Netflix
Pop Culture
Netflix social media Streaming
More From Pop Culture