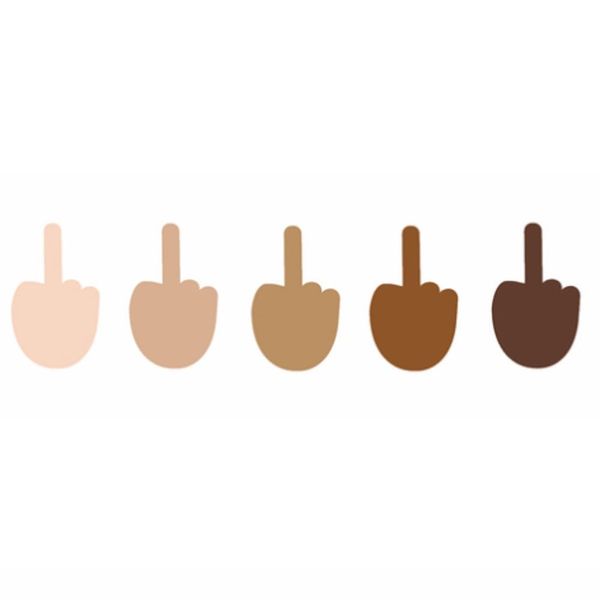 When you’ve had a bad day that no rendition of “Let It Go” can cure, there’s no better outlet for stress relief than digitally venting your frustrations to your friends. But in trying times, the princess emoji and the flamenco dancer emoji can be a bit too chipper to convey how you’re feeling. And if emojis are meant to represent the full range of human experiences, shouldn’t technology take the bad with the good and offer emojis for our angsty side? We were excited to learn that the release of Windows 10 in July will do just that, finally giving us a breakthrough emoji that flips the bird, along with a few significant updates. Scroll on for all the emoji news you need to craft your epic texts.

1. Middle Finger: Thanks to Microsoft, emoji rage may just become the new road rage, only much safer. As the first platform to offer built-in support for the raised hand emoji with its middle finger extended, Microsoft literally one-ups its competitors. When using the Windows 10 platform, you can flip the bird to any frenemy of your choice in a variety of colors. The only catch? They’ve got to have the Windows 10 platform. Sorry for now, Android and iOS users!

2. Diversity: Human emojis now come in a wider, more inclusive range of skin tones. The other characteristics of the emoji remain the same.

3. Default Skin Tone: When no specific skin tone is chosen for emoji people, the default skin tone in Windows is now gray, as per the Unicode recommendation that generic emojis be nondescript in appearance.

4. Facial Expressions: From relieved to confounded to triumphant, several emojis have received a facelift in Windows 10 to provide better continuity in how expressions are depicted. For the more daring, the new information desk person emoji offers a wink.

5. Hands: Star Trek fans will delight in the Vulcan Salute hand gesture added in Windows 10. Now every day, you can let people know to live long and prosper.

If you’re itching to upgrade from Windows 8.1, this slew of new and updated emojis might just tempt you to take the plunge into Windows 10 this summer. You can check out the full changelog of Windows 10 Emojis here.

If you could invent an emoji, what would it be? Let us know in the comments below!

Manasa Reddigari
Manasa is a freelance writer with a passion for the weird and wonderful technologies that are transforming life as we know it today.
Emoji
Tech
Emoji
More From Tech