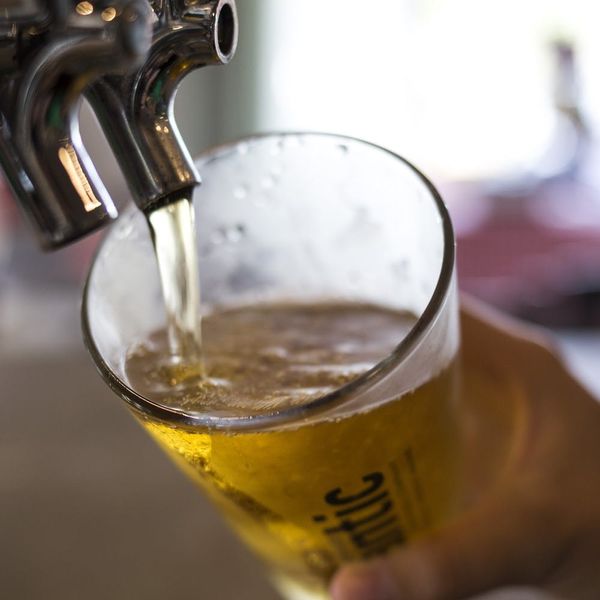 Your Keurig machine just got a whole lot more interesting! The doohickey that’s practically become synonymous with a quick, hot cup of joe (though there’s endless ways to brew it — check 20 suggestions here) may soon be brewing you another beverage entirely — and this one will be filled with alcohol.

Keurig has reportedly announced a joint venture with Anheuser Busch-In-Bev that will see the two companies masterminding an “in-home alcohol drink system.” Say what?!

Using the technology behind the Keurig KOLD (which was discontinued due to lack of interest), the two forces will combine powers to bring us brewed beer, cocktails and other alcoholic beverages.

Thus far, little much else is know about the venture, and we’ve gotta say: We’re left with entirely more questions than answers. Will this be more like a glorified tap, or will it include a way to actually brew/create a new drink, like the MiniBrew or SOMABAR? Is it merely an expensive convenience ploy for those too lazy to twist their own beer caps or lacking in bottle openers?

What IS this thing, exactly?

No one is entirely sure, but we DO know that it’s happening, and for now, that’s enough… we suppose.

Would you buy an in-home alcohol machine? Tell us yes or no @BritandCo.

Nicole Briese
Nicole is the weekend editor for Brit + Co who loves bringing you all the latest buzz. When she's not busy typing away into the wee hours, you can usually find her canoodling with her fur babies, rooting around in a bookstore, or rocking out at a concert of some sort (Guns N' Roses forever!). Check out all her latest musings and past work at nicolebjean.com.
Food News
The Conversation