Could This 2-in-1 Computer Mouse Become the New Standard? 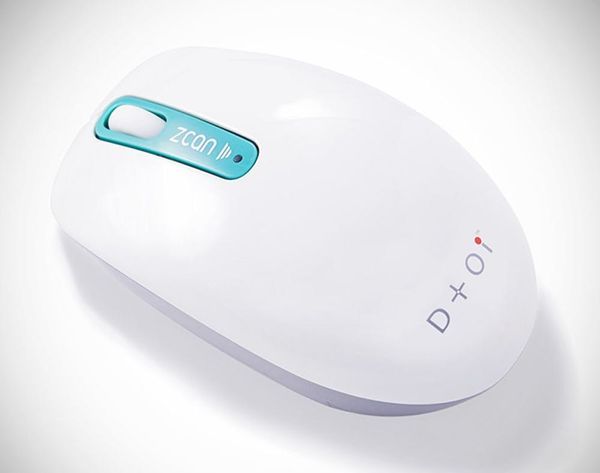 The first computer mouse was invented exactly fifty years ago, in 1964, by engineer Doug Engelbart. It featured a wooden shell, circuit board and two metal wheels that touched whatever surface it came into contact with.

You would think the eight year pattern would have continued in the development of the computer mouse, but it hasn’t. Today the optical mouse is still acknowledged as the standard computer mouse. WHAT, is right. The Zcan Wireless scanning mouse is trying to change that — and now that it’s surpassed its initial Indiegogo funding goal by 376%, it just might.

The Zcan is being marketed as the world’s first 2-in-1 wireless scanner. We’ve seen portable scanners before, but never a portable scanner that’s also a computer mouse. Now that’s different.

The multi-tasking gizmo can help you scan all those business cards you get at networking events (yes, we all have them) to your computer for safe keeping. You can even send those babies right into Evernote with just one click.

Hey, while you’re at it, you can scan those old family photos you’ve been meaning to organize, then share them with family and friends instantly through Facebook, Twitter, Flickr or email. Artists can use the tool to instantly share their sketches with the world.

Besides the standard mouse and scanner features, Zcan will act as your pocket-sized translator. The device supports over 199 languages and allows anyone with an Internet connection to to simply scan words or paragraphs to be instantly deciphered by Google Translate.

Do all of these uses have your wheels turning on what Zcan could do for you, maybe you and your budding biz? Thanks to thousands of Indiegogo backers the Zcan can be yours… soon. It’s available to pre-order online now for $80.

Do you think the Zcan will become the new standard for the computer mouse as we know it? Share your thoughts with us in the comments!