14 Girl Power Comic Books You Should Definitely Read This Summer 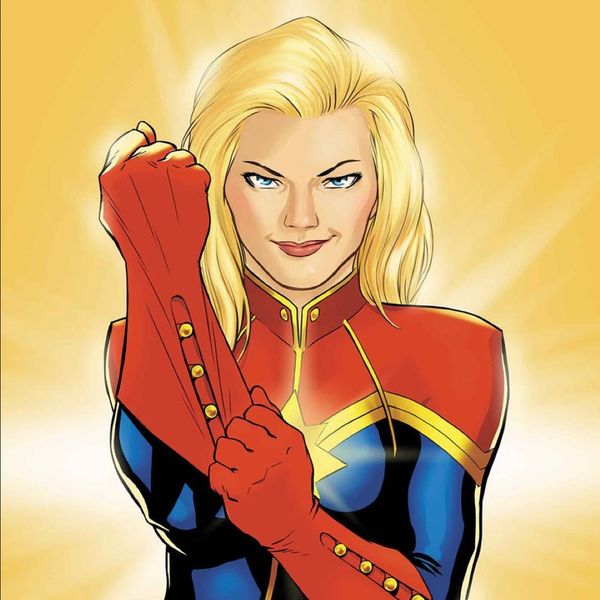 We love that superheroes have suddenly become mega popular at the box office. And this time around, it’s the ladies who are shining bright on the big screen — from Margot Robbie’s sure-to-be amazing performance in Suicide Squad, to Gal Gadot’s kickass role in Batman vs. Superman (that even helped land her a Wonder Woman movie!). Thankfully, we don’t have to wait until the next blockbuster comes out to experience our fave superheroines. Here are 14 #girlboss comic books that are sure to get you psyched for a super summer.

1. Ms. Marvel: Everyone is talking about this new heroine from Jersey City — and for good reason! A Muslim teenager with extraordinary gifts and immense power, it’s a story women of all ages should read ASAP.

2. Paper Girls: The team behind this ground-breaking title is crazy famous in the comic book world. Featuring Brian K. Vaughan from Saga and the legendary Cliff Chiang from Wonder Woman, this all-new series features a #girlsquad worth remembering.

3. Jem and the Holograms: You know a series is awesome when the New Yorker calls it an “exuberantly colorful all-ages tribute to girl power” (there can’t be a better compliment than that!). Fans of the feature film and newcomers to the series will instantly fall in love with this whimsical musical group.

4. Buffy the Vampire Slayer: Fans of the Buffyverse will swoon for this epic tale featuring all of our fave characters from the television series. With intense action, an awesome story arch and a seemingly endless supply of cool monsters, it’s just the blast from the past we need this summer.

5. Lumberjanes: Forget space camp, Lumberjane camp is where it’s at. Starring five best friends who are sent to defeat yetis, three-eyed wolves and giant falcons, it’s the real and relatable characters that will have you going back to this series time and time again.

6. Wonder Woman: The original and iconic feminist comic, Wonder Woman has definitely stood the test of time (minus that minor glitch in the ’50s where WW became a housewife… ). With so many comics in the franchise, one thing always remains: Justice must be served — and Wonder Woman is just the chick to do it.

7. Concrete Park: In this dystopian future, gang violence is the only sure way to achieve power. Featuring a diverse and stellar cast of characters, writers and creators, it’s a once-in-a-lifetime series that’s definitely worth checking out.

8. Captain Marvel: We love all the characters in the Marvel universe, but this crime-fighting boss just might be one of our faves. With real-world and superhero problems to deal with, she’ll get the help of The Guardians of the Galaxy in this introductory volume — but she can definitely hold her own too.

9. Harley Quinn: We’re SO excited about Margot Robbie’s Harley Quinn in the upcoming theatrical release of Suicide Squad (okay, we’re petty stocked for Jared Leto’s Joker too). An anti-hero with a gang of awesome gal pals… let’s just say this ex-girlfriend is not to be messed with.

10. Rat Queens: If you’re looking for a typical posh princess storyline, you aren’t going to find it here. Featuring the likes of Hannah the Rockabilly Elven Mage, Violet the Hipster Dwarven Fighter, Dee the Atheist Human Cleric and Betty the Hippy Smidgen Thief, this awesome fantasy comic is redefining an age-old genre in the BEST way.

11. Supergirl: Fans of the hit TV show are sure to fall in love with this original comic series from the very first frame. Cousin to Superman, Supergirl has her own problems to deal with on Earth — including fighting crime, making friends and figuring out her place in a strange and foreign world.

12. Saga: Critics can’t say enough about this witty fantasy from creators Brian K. Vaughan and Fiona Staples. Featuring an epic romance that pushes the conventions of gender roles, it’s definitely a comic that needs to be read from the very beginning.

13. Thor: Goddess of Thunder: Hold onto your capes, ladies and gents: THOR IS NOW A WOMAN. In an epic battle against the Frost Giants, the Goddess of Thunder might be Earth’s only hope. Here’s hoping for a Thor vs. Thor sequel coming soon!

14. Princeless: You know the story — the King and Queen lock away their precious daughter in a faraway castle, guarded by a dragon, to be rescued by a prince. Well, although Amelia was locked in a castle, she isn’t going to wait for some dumb prince to rescue her! This beautifully illustrated comic is a new-age fantasy that even rivals the awesomeness that is The Paperbag Princess.

What is your fave comic book of all time? Tweet us your picks by mentioning @BritandCo.

Ashley Macey
Ashley Macey is a lifestyle freelance writer who loves all things fitness, wellness, and creativity. When she's not exploring her home in the Pacific Northwest with her dog Max, you'll probably find her curled up with a good book and some hot tea. Follow her daily jaunts on Twitter.
Books
Home News
Books