See the 6 Biggest Bridal Trends for 2016 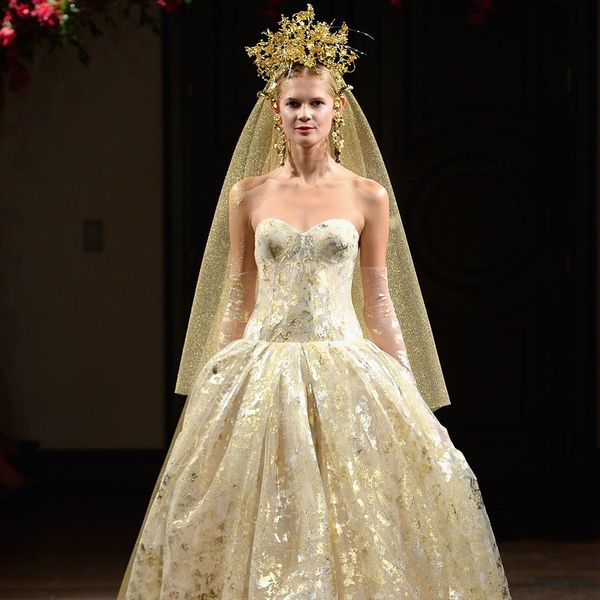 Overall, bridal fashion doesn’t change all that much year after year. For the most part the dresses are white and there is typically a lot of lace involved. But if you look closely you’ll see some changes in the detailing. Those poofy shoulders of the ’80s have been replaced — or rather, removed — in favor a countless spaghetti strap options. The floor-length hem is now rivaled by shorter, more casual options. And the veil? Well, it looks like that’s been forgotten for the most part. If you want to stay up to date on what’s trending down the aisle, check out these six emerging trends we spotted at NY’s recently wrapped Fall 2016 Bridal Fashion Week.

Because who says you shouldn’t show a little leg on your wedding day? Down the runways of Alon Livne, Reem Acra and Ines Di Santo we saw sky-high slits incorporated into otherwise traditional (or semi-traditional) gowns. The new addition gives dresses a modern, sexy edge while still keeping that classy bridal vibe. (Photos via Fernanda Calfat/Jemal Countess/Getty)

If you’re in need of a chic way to stay warm during your fall or winter wedding, here’s how to do it. Whether it was the sleeves at Alon Livne, a short skirt at Naeem Khan or a long overlay at Monique Lhuillier, all the standout runway pieces were rocking fur detailing. (Photos via Fernanda Calfat/Slaven Vlasic/Randy Brooke/Getty)

Beading and sequins have been staples in bridal fashion for some time now, but these dresses took it to the next level. At the Pronovias runway show we spotted some neckline detailing that demanded attention. At Monique Lhuillier, delicate rose detailing got a bold makeover, and at Ines Di Santo, that same look was taken one step further by incorporating color. (Photos via Randy Brooke/Getty)

Sorry flower crowns, but you’ve been outdone. Walking down the runway at Reem Acra, brides were rocking something sort of peculiar: floral-embellished, diamond-studded headphones. Over at Naeem Khan things were a little more traditional, but not much. Most the models at that show were wearing floral headpieces that looked like something you might see on Frida Kahlo. However, this gold bride in particular amped up the drama at Naeem Khan with a sky-high leafy look. At Marchesa’s presentation, models were also sporting metal hair accessories but in a slightly more wearable way. This silver number was our favorite of the bunch. (Photos via Fernanda Calfat/Slaven Vlasic/Getty)

We’ve seen bridal gowns separated into a skirt and crop top combo. We’ve even seen them transformed into a pant and shirt pairing, but this is totally new territory. At both Ines Di Santo and Houghton, brides wore lace leggings under (or instead of) bottoms. The difference between these two looks is drastic, but the contrast does a pretty great job of showing just how versatile this look has the ability to be. (Photos via Jemal Countess/D Dipasupil/Getty)

Ever since Solange rocked that EPIC cape dress at her wedding, the style has been on our bridal-attire radar. And while we did spot one full-blown cape go down the runway, this subtler alternative was much more popular. Most of the cape trains we saw were attached to the dress in the back and flowed free behind the bride. These styles spotted at Ines Di Santo, Claire Pettibone and Jenny Packham for David’s Bridal (!!!) all gave off a sort of medieval, Game of Thrones vibe while staying super relevant at the same time. (Photos via Cindy Ord/Jemal Countess/Astrid Stawiarz/Getty)

What’s your favorite trend spotted at Bridal Fashion Week? Share with us in the comments below.

Cortney Clift
Cortney is the senior writer and special projects editor at Brit + Co. She typically covers topics related to women's issues, politics, and lifestyle. When she's not buried behind her computer you'll find her exploring New York City or planning her next big adventure.
Wedding Style
More From Wedding Style