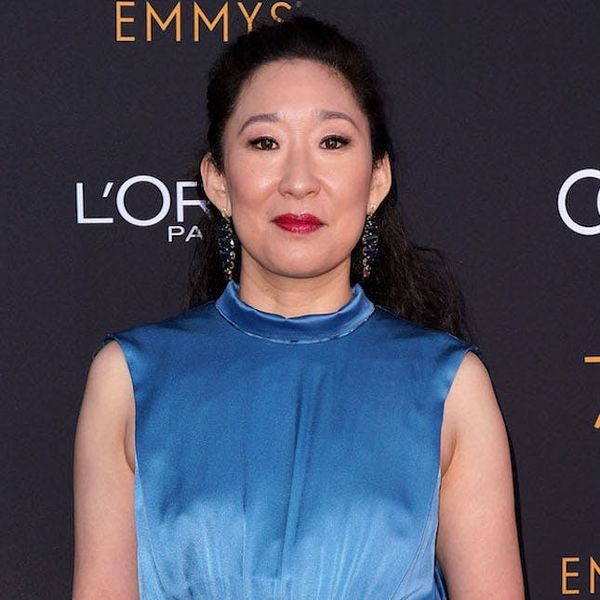 The 2018 Primetime Emmy Awards will take place on Monday, September 17, at the Microsoft Theatre in downtown Los Angeles, and while there are sure to be some unexpected surprises throughout the Michael Che and Colin Jost-hosted telecast, there are also a few moments we'll be specifically watching for. Click through to see what we're looking forward to at the 70th annual Emmy Awards.
The possibility of a historic win for Sandra Oh. The Killing Eve star has already made history as the first Asian woman to earn an Emmy nomination for Outstanding Lead Actress in a Drama Series, and if she nabs the award in the highly competitive category, her speech will undoubtedly be an emotional one. (Photo via JC Olivera/WireImage)
A record-breaking year for diversity in nominated performers. Awards shows are often criticized for a lack of diversity within its nominees, but the Emmys made strides this year when it set a record in nominating performers from diverse backgrounds. From Sandra Oh's historic leading actress nod to Donald Glover and Sterling K. Brown's nominations after their history-making wins last year, the TV landscape is starting to feel more representative — and the nominating bodies are finally following suit. (Photo via Alberto E. Rodriguez/Getty Images)
A chance for John Legend to double down on his EGOT-completing Emmy win. Legend already completed his EGOT — Emmy, Grammy, Oscar, and Tony — with a producing win at the Creative Arts Emmys earlier this month, but he's also nominated on Monday for Lead Actor in a Limited Series or Movie for his work on Jesus Christ Superstar. (Photo via Alberto E. Rodriguez/Getty Images)
An appearance by the Queer Eye Fab Five. Everyone's favorite new-again reality show won three of its four categories — including Outstanding Structured Reality Program — at the Creative Arts Emmys earlier in September, and while we won't get to see them accept any awards on Monday, they'll be on hand as presenters. We can't wait. (Photo via Christopher Polk/Getty Images)
Some Game of Thrones visibility to tide you over until season 8. As of now, there's still no confirmed 2019 release date for the eighth and final season of HBO's Game of Thrones. But at least some of the show's stars will be in attendance at the 2018 Emmys. GoT leads the pack with 22 nominations, including nods for Peter Dinklage, Nikolaj Coster-Waldau, and Lena Headey. We'll take any GoT action we can get. (Photo via Frazer Harrison/Getty Images)
Some newcomers to the Outstanding Comedy category. This year, the Outstanding Comedy Series category has been expanded to accommodate eight nominees, proving just how much the genre is thriving on the small screen. And with Modern Family missing from the list for the first time since 2010, there's room for newcomers like Glow, Barry, and The Marvelous Mrs. Maisel alongside repeat nominees Atlanta, Unbreakable Kimmy Schmidt, Black-ish, Silicon Valley, and Curb Your Enthusiasm. (Photo via Amazon Prime Video)
Red carpet sightings of our favorite couples. The Emmys red carpet is often a go-to for people to confirm rumored romances or dish out headline-grabbing PDA with their longtime partners. We're just as much here for the celebrity couple cuteness as we are for the show. (Photo via Frazer Harrison/Getty Images)
The acceptance speeches. Last year's Emmys gave us Lena Waithe's moving speech, 2016 gave us Sarah Paulson and Sterling K. Brown, and 2015 gave us Viola Davis. We can't wait to see what this year brings. (Photo via Kevin Winter/Getty Images)
Nicole Villeneuve
Nicole is an entertainment and lifestyle writer covering pop culture, news, and cool women doing cool things. She likes yard sales, MTV's Teen Mom, and putting too many memes in the group chat. She lives in Toronto.
Awards Shows
Pop Culture
Awards Shows Emmys
More From Pop Culture