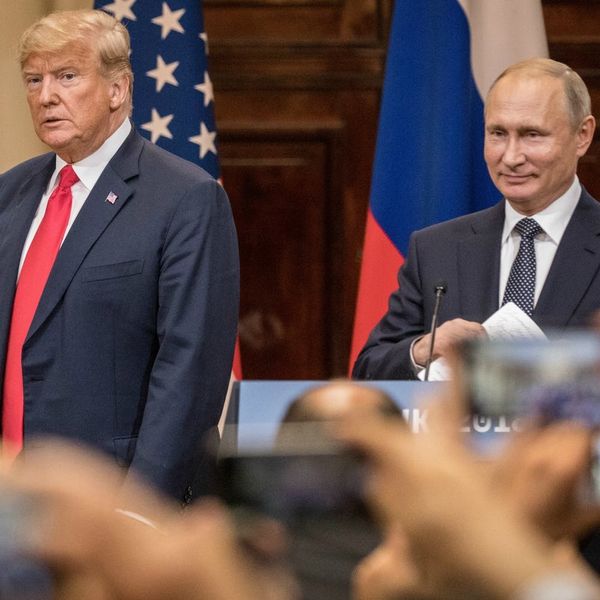 Yesterday, President Trump had his first public meeting with Russian president Vladimir Putin. And while political pundits were curious about how the meeting would go down, many people stateside (including a number of high-profile GOP leaders) have expressed dismay and shock about the way things went down — some even going as far as accusing the president of treason.

The meeting, held in Helsinki, Finland, was a mix of showmanship and bravado and has created a shock in Washington, with Republicans meeting today to figure out what will happen next. There’s no doubt they will be discussing these five takeaways and a number of other issues that have arisen since the public meeting.

1. The president doesn’t agree with his own nation’s intelligence officials.

The president seems to have sided with Russia’s insistence that they played no role in interfering during the 2016 election cycle, telling the press that he didn’t see “any reason” as to why the Russians would want to interfere with our democracy. The Department of Justice feels differently, however, having recently charged 12 Russian Intelligence Officers with hacking a number of Democratic sites including the DNC and the Democratic Congressional Campaign Committee.

Putin, however, said he definitely was siding with a Trump win, telling reporters he was hoping for a return to a more favorable US-Russia relationship.

2. The Republican party is in trouble.

“The president must appreciate that Russia is not our ally,” House Speaker Paul Ryan, R-WI, said immediately after the press conference, adding, “there is no moral equivalence between the United States and Russia, which remains hostile to our most basic values and ideals.”

In fact, many long-term supporters of President Trump are now distancing themselves from the president’s performance Monday: Senate Majority Leader Mitch McConnell insisted that Russia is not a friendly nation to the US while adding that he believes firmly in the DOJ’s intelligence, Senator John McCain called the meeting a “tragic mistake,” and even outgoing Senator Orrin Hatch said that there was no doubt that Russia had interfered in 2016.

3. The midterm elections just got even more significant.

With so many exciting elections coming up in November (see Alexandria Ocasio-Cortez), the Democratic party was already on track to possibly take the House from the Republicans. But with this current display from the president, many longtime GOP supporters will also be watching how the party reacts to the Russia summit, which may change voting patterns across the US.

4. FOX News won’t back President Trump on this display, which could turn many longtime supporters.

FOX News has been a strong supporter of the president since his campaign began in earnest, but after the Helsinki summit, many of the station’s strong-right pundits expressed outrage at the way that the US appeared to bow to Russia during the meeting. Hosts throughout the day used words like “disgusting,” “surreal,” and “unpatriotic,” to describe the president’s performance, but it was Fox & Friends host and the daughter of Trump’s Ambassador to Russia Abby Huntsman who tweeted, “No negotiation is worth throwing your own people and country under the bus.”

Although the network may soften its stance over coming days, the president’s fan base will certainly take to heart what their favorite news anchors have said about the summit.

5. The president’s behavior could set us up for future cyber attacks.

Just last week, Dan Coats, the Director of National Intelligence warned that another cyber attack on the US could be imminent. “The warning signs are there. The system is blinking. It is why I believe we are at a critical point,” Coats said in a meeting in DC on Friday, likening the warnings to what was happening shortly before the attacks of 9/11. Coats also called Russia the “most aggressive foreign actor, no question. And they continue their efforts to undermine our democracy.”

Now, some in Washington fear that Coats may quit in response to the display at the Helsinki summit — and that Chief of Staff John Kelly may go with him — leaving the administration without key players to help combat future attacks as effectively as they might with these men in their roles.

While President Trump continues to pat himself on the back for a job well done, many of those in power will continue to scramble. And although the fallout from this massive misstep on the president’s actions may still not be entirely clear, it will definitely change the political landscape in one way or another.