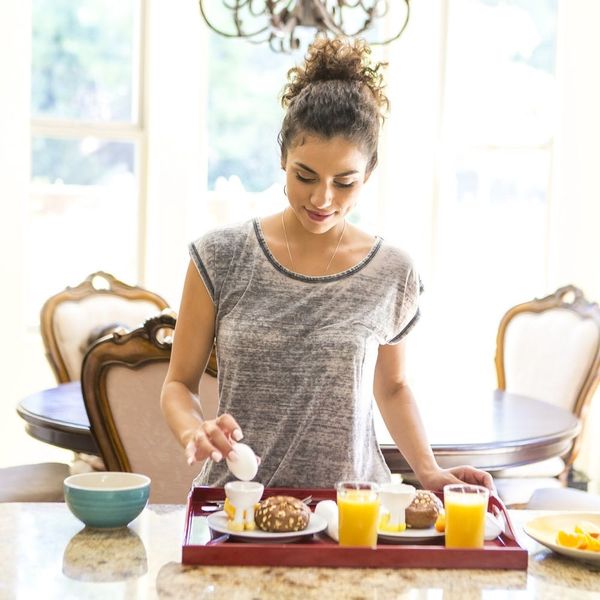 We’re all about getting healthy. Not only does it make your body feel good to eat well and exercise regularly, but it’s also great for your mental health. Unfortunately, sometimes people take their efforts a little too far in the name of wellness. What are we talking about? Fad diets. The worst thing about fad diets is that they’re pretty much always ineffective. Even if you lose some weight while on one, you’re very likely to gain it back because of the drastic difference between the diet and how you normally eat. In general, it’s better to make small, lasting changes to improve how you eat — that way you can enjoy the results long term! Curious which diets we saw this year that don’t stack up to science? Keep reading to find out 2016’s worst fad diet culprits.

1. Negative Calorie Food Diet: You may have heard that some foods have “negative” calories. The idea here is that these foods — like lettuce, celery and grapefruit — have such low calorie values that your body burns more calories digesting them than the number you’ve ingested. This diet involves focusing on these negative calorie foods in order to reduce the total amount of calories you’re eating and, thus, lose weight. The problem? There’s no such thing as a negative calorie food. In theory the idea of these foods makes sense, but there’s no scientific evidence that they are real. While you’ll certainly benefit from eating more fruits and veggies, there’s no reason to focus on negative calories since they don’t actually exist!

2. Juice and Smoothie Cleanses: Anytime you hear the word “detox” in relation to a diet, it’s probably a clue to stay away. Your body doesn’t need any help clearing you of “toxins” — that’s what your liver is for! Juice and smoothie cleanses are less popular than they have been in years past, but we still see people trying them, especially diets where all meals are replaced by replacement smoothies. With a juice cleanse, your body is getting almost no protein. With a smoothie cleanse, you’re likely not getting enough fruits and veggies. Plus, these diets aren’t sustainable for a long period of time, meaning that their results will be reversed as soon as you start eating normally. Instead of going all-out on the smoothie and juice thing, include one per day in your well-rounded diet, which should include meals that consist of real, solid food!

3. Fruititarian: We know what you’re thinking, but yes, this is actually a diet that people try. The concept is simple: You only eat fruit. There’s a huge social media community around this trendy fad diet, making it way more popular than you’d expect. Just check out the #fruititarian hashtag on Instagram. It’s virtually impossible to eat only fruit all the time, so many fruititarians focus on eating mostly fruit, but add in some plant-based protein to keep themselves healthy. Still, eating such large quantities of fruit seriously ups your sugar intake and can cause major digestive issues. If you don’t want to spend all day in the bathroom on the reg, we’d say skip this trend.

4. Raw Food Diet: Here’s the deal with the raw food diet. Again, it’s awesome to include as many fruits and veggies in your daily meals as you can, but not all the food you eat needs to be raw and completely unprocessed. Eating only raw foods can cause digestive problems, which may or may not go away over time if you continue with the eating style. Plus, getting enough nutrients is a major challenge. There are many sources of plant-based protein, but if you’re not able to eat things like cooked legumes or protein powder, you’re mainly just left with nuts and seeds. Similarly, it’s challenging to get adequate amounts of other key nutrients like omega-3 fatty acids and zinc from only raw and vegan foods. If you’re really interested in testing this out, try incorporating one completely raw meal per day and balancing it out with some cooked foods to make sure you’re getting all the good stuff your body needs.

5. Baby Food Diet: This diet where you literally eat only baby food is one of the craziest fads we’ve ever seen. It’s been around for awhile, and we’d really like to see it disappear with 2016. Because the diet consists of mainly blended or pureed fruits and veggies, it has many of the same issues as juice and smoothie cleanses. What’s more, studies show that actually chewing your food can contribute to satiety, meaning there’s a good chance you’ll feel unsatisfied after following this diet for any prolonged period of time.

6. Gluten-Free: Listen, if you’re not celiac or gluten-sensitive, this diet probably isn’t going to do much for you. It’s true that cutting out bread, pasta and pizza may help you lose weight, but not if you replace those foods with gluten-free alternatives. Gluten-free products often are less healthy than the real thing, since the focus is on making them taste as “real” as possible. Plus, whole wheat products provide a ton of dietary fiber, which is known to be important in the weight loss process. In short, there’s no reason to follow this diet unless you have a medical reason to.

7. Ketogenic Diet: The ketogenic diet has long been used by athletes to achieve peak performance. Essentially, you cut out carbs, reduce protein intake and eat very high levels of fats. The diet’s name refers to the state of ketosis, a medical term for when your body is running on only fat. It’s true that your body will burn fat in this state which will cause you to lose weight, but because the diet is so extreme it can wreak havoc on the way your body processes food and can actually become less effective over time. Yet again, if you adhere to this diet and then return to your normal way of eating, you’re highly likely to gain back any weight lost.

Have you ever tried any of these diet fads? Tell us how it went @BritandCo!

Julia Malacoff
Julia is a writer, editor and proud life-long vegetarian based in Brooklyn, NY. An avid traveler, meditation enthusiast and exercise junkie, she stays active in every new locale she visits.
Diet
Health
Diet Healthy Living
More From Health