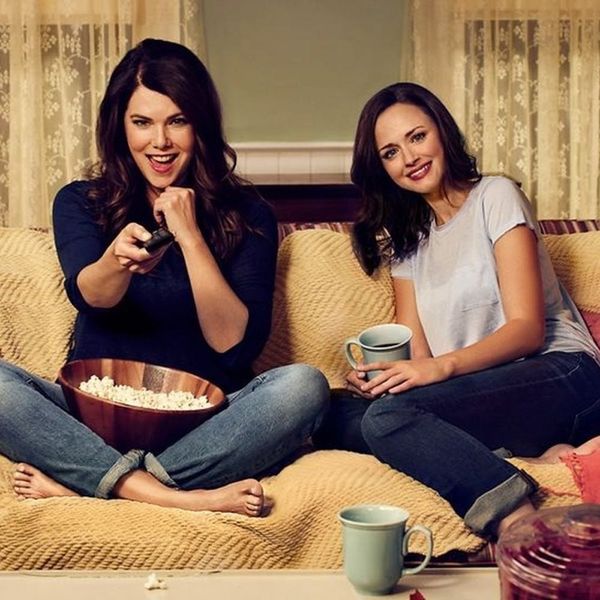 Chances are, you’re already six or seven seasons deep in your Gilmore Girls re-watch in preparation for the four all-new episodes premiering on Netflix later this week. Reliving every detail of Lorelai’s relationships with Max and Christopher, and Rory’s almost-husband Logan (who she MIGHT end up with in the revival? Nah.) are important refreshers — but unfortunately, not everyone has been able to relive the whole series.

It’s near impossible to pick a favorite Gilmore Girls episode, and just as tricky to pinpoint the most important ones. But in an effort to provide an easily digestible summary of some of the most memorable and defining arcs in the show’s history, here are the eight episodes we’d recommend re-watching if you have the time before Friday. And if nothing else, at least catch up (and cry) with these short recaps. Go!

1. The Pilot (Season 1, Episode 1): Pilots can be pretty rough around the edges, and Gilmore Girls is no exception. But in this case, it’s also absolutely essential. Not only do you get to meet our heroes Rory and Lorelai Gilmore, but learn the quirks and the people and places that would remain important to the entire series. Like coffee. Always coffee.

2. When Jess Moves to Town (Season 2, Episode 5): Luke ignores Lorelai’s advice not to help his sister and take in his wayward nephew Jess, and we’re SO GLAD HE DID. This is also the episode where Jess steals one of Rory’s books to write her notes in the margins, a move that teenage us totally swooned over (just like Rory) and grown up us is like, “how DARE you” about, but still — it remains a classic.

3. The All-Night Danceathon Where Dean Breaks Up With Rory (Season 3, Episode 7): “They Shoot Gilmores, Don’t They?” is a classic episode that sees Lorelai and Rory partner up for the Stars Hollow 24-hour dance marathon. It’s in this ep that Dean reaches his breaking point over the obbbvious chemistry between Jess and Rory, and dumps Rory on the spot. Truly a heartbreaking teen scene.

4. When Rory Moves Out to Go to Yale (Season 4, Episode 2): The transition of Rory moving out to go to college was really hard on the Gilmore girls, a move so earth-shattering that you even kind of felt it in the quality of the show for a bit. But that’s neither here nor there — Rory coming to terms with how much she was going to miss her mom, and how hard even the most exhilarating moments of growing up are, is still so moving. Also: She finds out Paris Gellar is her roommate. Lol.

5. When Rory Loses Her Virginity and Also Luke and Lorelai Kiss for the First Time (Season 4, Episode 22): After years and years of anticipation, Luke and Lorelai share their first kiss at the Dragonfly Inn. It’s magical. And Rory loses her virginity! To Dean! Who also happens to be MARRIED TO SOMEONE ELSE. And Lorelai walks in on it. YIKES. So much going on. This was the cause of one of the very few real conflicts Rory and Lorelai ever had. So dramatic.

6. When Rory and Lorelai Make Up and Rory Goes Back to Yale (Season 6, Episode 9): So we skipped over the part where Rory tries to steal a yacht and gets arrested, and Lorelai picks her up from jail. Rory also decides to drop out of Yale in that episode. It spawns FAR too many episodes where the Girls aren’t even speaking, and our delicate souls cannot handle it. Everything is made right in this episode, and we cried and cried.

7. When Richard and Emily and Lorelai and Rory Lay It All on the (Dinner) Table (Season 6, Episode 13): This episode is mainly notable for a Friday night dinner fight that’s one for the books (seriously), but the mounting tensions between Luke and Lorelai as they stare down the barrel of a wedding add even more drama.

8. Rory’s Goodbye (Season 7, Episode 22): The last season of GG is an outlier, because it’s the only season that didn’t have Amy Sherman-Palladino or Daniel Palladino on board. It hardly counts in the grand scheme, but the last episode is a tearjerker, because we’re not monsters! Rory is off to cover the campaign of a then-Senator Barack Obama as a political reporter for a magazine, and the town throws her a goodbye party. Rory gives a quick speech and stops herself short of “gushing,” but sweetly thanks her mom for everything. Then, later, when Lorelai is anxiously listing off things she forgot to give Rory in preparation for her trip, Rory stops her and says, “You’ve given me everything I need.” And then we died.

What would you pick as a must-rewatch Gilmore Girls moment? Let us know over @BritandCo!