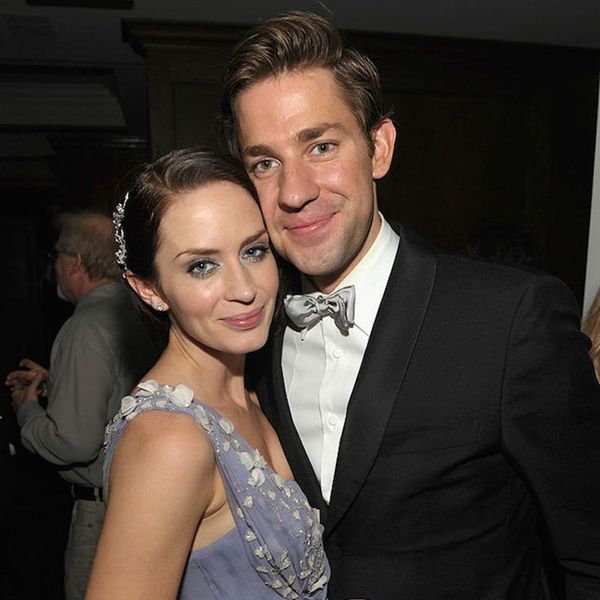 This week, after almost a decade of being together, Hollywood power couple John Krasinski and Emily Blunt announced they would FINALLY be working together. John is directing a table-read of the Matt Damon and Ben Affleck classic Good Will Hunting, and he’s cast Emily in the role of Skylar (originally played by Minnie Driver).

“So I’m casting this #LiveReadNY of Good Will Hunting, then ran into this #girlonthetrain and thought… yeah it’s time to work together!,” he captioned an adorbs pic of the two on Instagram, before capping it off with an ULTRA dorky Jim Halpert joke of “Howdaya like THEM apples?” Frankly, John, we love them.

We’re not surprised John cast his wife in this project — these two are very publicly very in love with each other, and if their previous collaborations — um, yes, we’re talking about their growing family and their insanely nice home — are any indication, we’re in for something good. Here are eight times we couldn’t get enough of John and Emily’s love.

2. “[Director] Rob Marshall did the slowest double take of all time and then queued a 125-piece orchestra and she started singing and I just wept,” John told the Huffington Post about hearing Emily sing during rehearsals for Into the Woods. (Photo via Christopher Polk/Getty)

3. “All I can say is that it’s an effing blast,” Emily told Modern Luxury magazine about being married to John. “It’s just great, and I’m so happy.” It’s the simple things. (Photo via Dimitrios Kambouris/Getty)

4. “I met her and I was so nervous,” John told Ellen on their love at first sight. “I was like, ‘Oh god, I think I’m going to fall in love with her.'” (Photo via Christopher Polk/Getty)

5. “The truth is, she really is that person who would like me any way,” John said to Elle about Emily enjoying his new ripped physique but not caring either way. “But I don’t think she’s going to kick the eight-pack abs out of bed.” (Photo via Alexandra Wyman/Getty)

6. Emily told InStyle that John has changed her life. “When I feel the support that I have from him, I feel invincible. There’s someone behind you on your good days, and someone in front of you on your bad days.” (Photo via Paul Hiffmeyer/Getty)

7. John told People that he thinks his wife is “hilarious, extremely talented and I’m definitely her number-one fan.” (Photo via Frazer Harrison/Getty)

8. He also told People that he’s “so proud to know that my daughters are going to grow up knowing that their mom is an incredibly hardworking, wonderful woman.” Annnnd cue the tears. (Photo via Jamie McCarthy/Getty)

Do you want to see more of John Krasinski and Emily Blunt working together? Let us know @BritandCo!