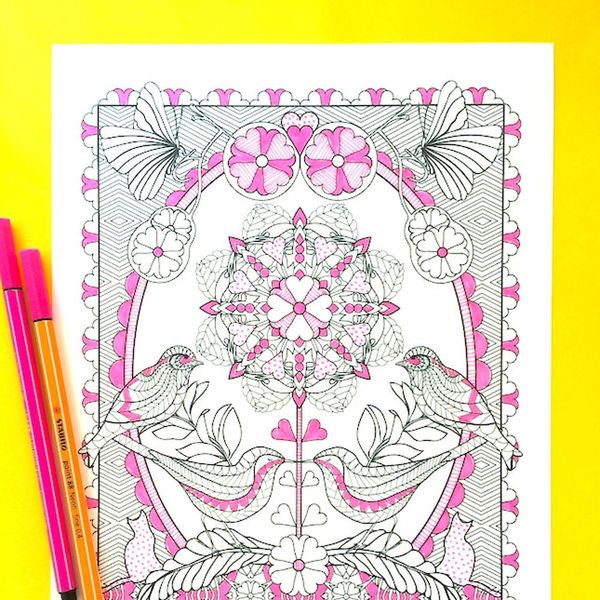 Often you think of creative projects as solo endeavors — something you have to create with your own two hands. There are times when the pooling of ideas, however, can create something even more beautiful than something you dreamed up on your own. That was the thinking behind Adobe’s very first adult coloring book print, which they are releasing specially for Valentine’s Day. Adobe put out a call for images using the app Adobe Capture CC, then commissioned painter and textile designer Jenean Morrison to create a gorgeous crowd-sourced piece with the submissions. Jenean is an OG in the adult coloring game (PSST, have you ever checked out Brit + Co’s own Pattern Play coloring book?) having published her first coloring book back in 2012, and currently has six titles to her name and has sold over 90,000 books.

Jenean’s first foray into the world of adult coloring books goes back to childhood, of course — specifically back to a particular relic of her own childhood. “I actually came across a coloring book when I was a child and it was a design-based coloring book — it was the kind I always liked. I wasn’t crazy about the ones with pictures, things to color, farm scenes or princesses; I always liked the design books,” she told us. “When I saw it, I realized that I at that point had the skills to create my own and my husband had just read about CreateSpace, which is Amazon’s self-publishing platform. So I just went through all the designs I had and within three weeks from coming across that old coloring book, I had this one designed and published.”

And sure enough, people loved it. “There weren’t a lot on the market at the time and people really responded well and that sort of encouraged me, getting a good response, so I just continued to steadily put them out,” she explained. “When the trend happened in 2015, I already had six or seven books on that market at that point.”

In regards to her process in crowd-sourcing and creating Adobe’s first adult coloring book, Jenean tells us,”I pulled all the submissions out [of the Creative Cloud Libraries] and left them on my Illustrator files for a couple of days. And then I just started pulling as many little pieces and parts from as many different shapes as I could and started incorporating them in the form of patterns and little designs on the page.” The result is simply breathtaking.

As for how her collaboration with Adobe came to be, Jenean says, “I went for years just working behind the scenes. In 2013, I got my first iPad and downloaded the Adobe apps. I really like working in Sketch and Draw and it was so quick to do, I started sharing that artwork on Instagram. I decided 2014 was the year of sharing to try to get myself more comfortable with putting the artwork out there. I started putting it out there and I started tagging it, and that’s how my collaboration with Adobe first started. They saw the work, they liked it and they responded. They’ve been really great at getting more exposure for my work, sharing it with their fans and telling people what I’m doing, so it’s just been awesome.”

For other creatives, she does have a word of advice or two. She tells us, “I would just say, make work, make lots of it and don’t be afraid to share.”

Check out the end result below (and perhaps download and print for V-Day!).

Kimberly Wang
Kimberly Wang writes about all things pop culture, tech, style, and beauty. She's a Bay Area transplant and has an MFA in Creative Writing from Columbia University. On a sunny New York day, you can find her hanging out with her mini schnauzer Isabelle Jellybean on a blanket in Central Park.
Adobe
Tech
Adobe Coloring Books Tech News Valentines Day
More From Tech