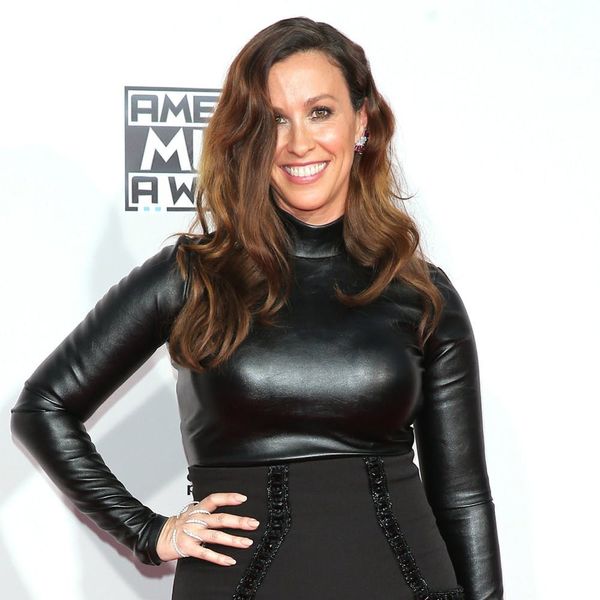 It’s a weekend full of new arrivals! We just gave you your first look at Bachelor alum Ali Fedotowsky’s newest addition, Molly Sullivan, earlier this evening and now, our fave alt-rock chick, Alanis Morissette (who recently went mermaid chic with her underwater baby bump) has officially announced that she’s joined Ali as a mommy, albeit twice-over (Alanis has a son as well).

Er, rather, Ali joined her, as the singer apparently gave birth several weeks ago: She revealed her daughter’s birthday to be June 23 in her Instagram debut caption. Alanis has kept things mum until today, however, perhaps reveling in all the nuances of motherhood with her sweet little babe.

We can’t say that we blame her after getting a peek at Onyx Solace Morissette-Treadway (we know: coolest name ever, right?). Just LOOK at that sweet little face! And so much HAIR! We can’t imagine where she gets that mane from, Alanis. *wink emoji*

Keeping things simple and to the point (Alanis never was one to beat around the bush), she left things at the announcement and one lonely hashtag: #beyondblessed.

Congratulations, Alanis — we’re beyond happy for you!

Are you “Head Over Heels” for Alanis’ baby girl’s name? Tell us over @BritandCo!

Nicole Briese
Nicole is the weekend editor for Brit + Co who loves bringing you all the latest buzz. When she's not busy typing away into the wee hours, you can usually find her canoodling with her fur babies, rooting around in a bookstore, or rocking out at a concert of some sort (Guns N' Roses forever!). Check out all her latest musings and past work at nicolebjean.com.
Celebrity Baby
Celebrity News
Celebrity Baby Celebrity Baby Names Creative Baby Names Music Unique Baby Names