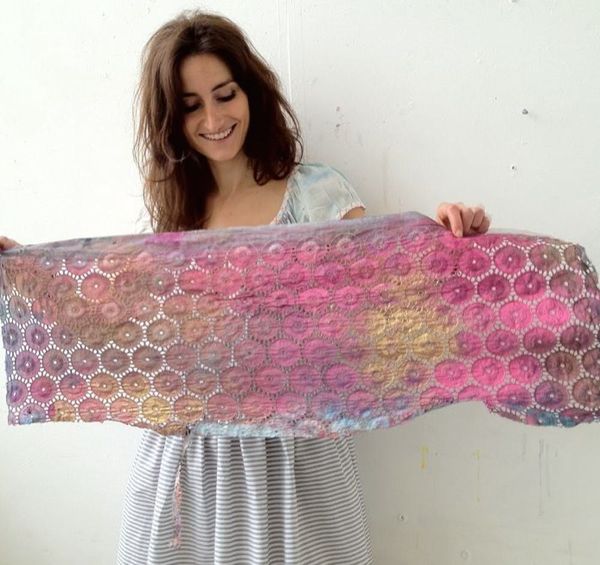 We’re always on the hunt for the ultimate #girlbosses, whether they’re women ruling the tech scene or crushing it on the culinary front. This week, we’re chatting with our first Career Muse, Alix Pietrafesa, better known as Alix of Bohemia. For any aspiring designer, artist or boho-chic fashionista, this up-and-coming designer is one to watch. Alix shared with us the highs and lows of her fashion journey, which she says was an accident.

While attending college at Saint Andrews in Scotland, Alix bought a sewing machine to use as a creative outlet, since there wasn’t a studio art program available. Drawing inspiration from the melange of international styles around her, she started to combine styles with fashion inspired by her favorite art history era: post-war Bohemian Paris. As she developed her pieces, her classmates began buying the clothes she made off her back.

Post graduation, she moved to NYC and got a job in fashion. She hated everything about it, from the politics and craftsmanship to the unbreakable fashion calendar. After uninspired days at work, she would stay up all night making her international, bohemian-inspired jackets, which she’d sell as soon as she made them.

After splitting her time between work and her passion, Alix decided it was time to go back to Europe. She advertised a trunk show of her jackets and made enough money to buy a one-way ticket to London. She didn’t stay there long, though. Four weeks after her return, she fell in love and moved to Hong Kong, where she continued her double life. By day, she was the manager of a contemporary art gallery, and at night, she designed clothes.

On a visit with her mother, she came across a giant portrait of Ann of Bohemia that her mother said reminded her of Alix. That’s when Alix of Bohemia was born. Alix decided to blog about her international travels and clothes-making, calling herself “Alix of Bohemia.” She designed each and every jacket to be unique, tying it to a place and a story. Each piece carried the same intention: “A good jacket can take you anywhere.”

The Bohemia jackets began to sell so well that Alix decided to pursue it full time, even though it meant leaving her boyfriend and Hong Kong behind. Still, she had to prove to herself that Bohemia could stand on its own. Today, Alix is back in New York and doing NYC fashion her own way: She doesn’t follow the fashion calendar, doesn’t advertise and is not beholden to investors. She only buys the supplies she can afford. Last fall, her unique and heartfelt approach earned her a feature in Vogue and partnerships with Moda Operandi and Bergdorf Goodman.

Says Alix of her journey, “It’s a very lucky and fortunate path. It’s difficult to be self-sustaining, while also being able to live and eat. I work on the floor and compose everything spontaneously, inspired by making a good product for the community around me. Not everyone can buy a painting, but you have to wear clothes.”

Q+A With Alix of Bohemia

B+C: What has been the peak of becoming Alix of Bohemia?

AP: It’s always such a thrill to see clients excited to wear my stuff. When I sold in Bergdorf Goodman in New York City this past fall, and they brought out my sign, it felt real.

B+C: What has been the valley of becoming Alix of Bohemia?

AP: When I was living in London in my work studio, and there was no shower or hot water in the sinks. I would sneak into a local social club to shower.

B+C: What’s the best piece of advice you’ve ever received?

AP: Be focused and be consistent. Be very sure and focused on your vision, even if you don’t know what the end goal looks like. Ultimately, the consistency and focus will amount to something.

B+C: Who is your style icon?

AP: Oh my gosh. So many. My mother is the most glamorous and inspiring person ever: She would always pair the most surprising things together and look insanely gorgeous. I also love Jane Birkin, Keith Richards, Patti Smith. Women who are confident in who they are and don’t care what you think are the types of women I admire.

B+C: Which Alix of Bohemia jacket is your favorite?

AP: I don’t really own a jacket of my own. I recently made a jacket of 100 year-old Afghani fringe. It’s humbling and I feel like I am wearing a piece of history. I hope to be able to keep it.

Want your own Alix of Bohemia jacket? Check out her website! Let us know what #girlbosses inspire you on Twitter at @BritandCo!

Claire Cook
Claire Cook is the West Coast Marketing & Communications Manager for Girls Who Code, a national nonprofit organization working to close the gender gap in the technology and engineering sectors. With a background in entertainment marketing (One Direction, Tori Kelly, Todrick Hall, etc.) and leadership communications, Claire is passionate about developing powerful brand messages that are distributed through creative storytelling to inspire young people. In her spare time, Claire teaches yoga sculpt at Core Power Yoga, is a marathoner and keeps a blog, The Bear Books. Her writing has been featured in The LA Times, Brit.co, I Am That Girl & RAW Beauty Talks.
Work
More From Work